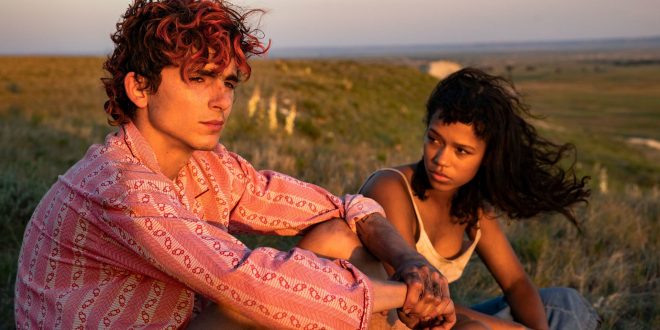 Director Luca Guadagnino’s sublime sensitivity, “I Am Love”, “Call Me By Your Name”, “Brideshead Revisited”, is limitless, stratospheric; he has visualized, put on the screen, a narrative, emotions others have felt, but are incapable of expressing; his vision travels into untouched realms, recognizing, accepting the “other”, gifting viewers insights into those shunned, oftentimes horrified by; “Bones and All” (not for the squeamish) surpasses, smashes, glamorizes cannibalism; “Maren” (luminous Taylor Russell), because of her proclivity, ditched by her father at eighteen, must forge her own path in a world of excepted dietary needs and restraints; she is sturdy, tough, a realist and relieved when she meets “Sully” (totally mesmerizing Mark Rylance) one of the pack who enlightens her to its existence; she is not alone, and when she encounters “Lee” (a Luca favorite, chameleon Timothee Chalamet) their age appropriate relationship commences with shared dispositions, anchoring, what serendipitously, mutates into love. “Bones and All” demands much from viewers, those who linger are rewarded as repugnance dissipates, substituted by two isolated individuals, yearning for societal normalcy, aware of its futility.

GLASS ONION: A KNIVES OUT MYSTERY
“Knives Out” was a delightfully twisted whodunit caper; imbued with interesting, complicated protagonists, an “edge of your seat” treat. “Glass Onion”, was at best, an anemic sequel. Director Rian Johnson’s film is gorgeous to look at: island scenes and the glacial beauty of billionaire’s “Miles Bron’s” (first-rate Edward Norton) glass palace, stunningly breathtaking. Lacking in depth or significance was a benign  cast of “characters”: Daniel Craig, (“Detective Benoit Blanc” with an accent, a combination of Southern drawl and the wrong side of the Themes is a caricature of his former role); superficially reigns in depictions of meaningless personalities: Madelyn Cline (“Whiskey”, a sexy, brain- dead, idiot), Kate Hudson (sickeningly, stupid and appropriately named “Birdie Jay”); Kathryn Hahn (dingbat Claire Debella, a politician); Janelle Monae (struggles in a dual role, without garnishing empathy as “Cassandra Brand”). Except for Miles Bron, the tech billionaire host (pivotal, Edward Norton) and the mysterious closeted killer, the “Glass Onion” served a huge dose of ennui.