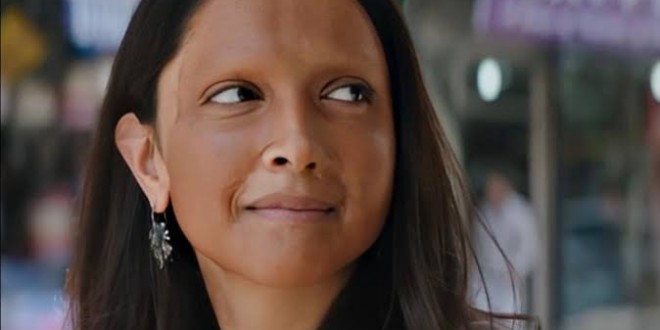 Director Meghna Gulzar and actor/producer Deepika Padukone bring to the screen the insidiously wicked, immoral, degenerate acid attacks exponentially occurring throughout contemporary India; perpetrated by those ignored, rejected, shunned by women for a myriad of reasons; these crimes are minimally prosecuted, and the penal system, and its forgiving incarceration is a shameful blot on India’s code of conduct/justice.

Exquisitely beautiful Deepika Padukone embraces the role of real life victim, Laxmi Agarwal (attacked in 2005, at fifteen, by a rebuffed suitor); Padukone’s performance is shockingly empathetic, painfully perfect; she morphs from naïve, enchanting school girl to a woman whose scars (suffers seven surgeries) become a badge of courage and activism, leading to redefining of Section 326 A of the penal code; shameful disfigurement, a face once revered, now horrifies; Padukone gifts Agarwal the lionization she has earned and deserves;  a modern hero, inspiring other victims to join her crusade, championing those whose lives are irrevocably damaged, changed by those sick, mini-minded delinquents, perpetrators. Accountability, piercingly pungent, screams throughout “Chhapaak”.

Structurally refined, viewers see the undamaged “Malti/Laxmi” near the conclusion; audiences have adjusted and recognized the glory that resonated from within, a glory that no amount of acid could demolish, destroy, dismantle.