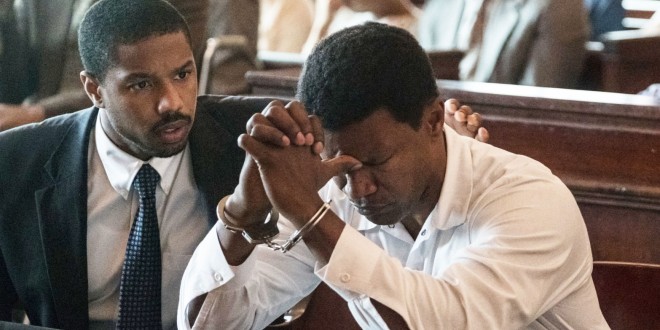 Nelson Mandela states that “the brave man is not he who does not feel afraid, but he who conquers that fear”; Bryan Stevenson (impeccably depicted by Michael B. Jordan) a Harvard-educated lawyer is the paradigm of courageous resolve, overturning insurmountable odds, supplying justice, a voice, for death row inmates: disenfranchised, marginalized, poorly defended, fraudulently incriminated and cast off by a society that refuses to recognize their intrinsic, individualistic rights; “Just Mercy” based on Stevenson’s 2014’s book of “justice and redemption” featuring the falsely accused and maligned Walter McMillian (another unblemished performance by Jamie Foxx) in his battle to save his life and salvage the injustice of a tainted, entitled, bigoted bureaucracy; directed by Destin Daniel Cretton, “Just Mercy” elucidates the capacity of one man’s determination to change the course of history.

The disparity between the races in 1980’s Alabama speaks with a painful factuality; McMillian did not kill eighteen-year-old, white Ronda Morrison; he was condemned because he was African American, disposable, and deemed unworthy of esteem; forty years later, there have been headways of encouragement in racial divides, but we still have “miles to go before we sleep, miles to go before we sleep.”