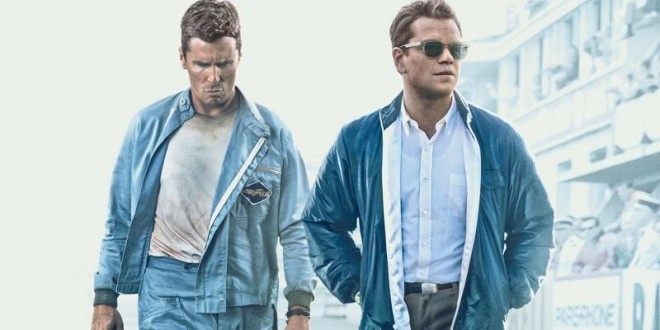 Director James Mangold (“Walk the Line”) gratuitously, spectacularly blesses audiences with a film designed to please, placate, entertain, not just racing enthusiasts, but all film devotees. Matt Damen and Christian Bale dominate the screen (reminiscent of Brad Pitt and Leonardo DiCaprio in “Once Upon a Time in Hollywood”) imbuing their friendship with simple, sublime sincerity; integrity rarely demonstrated. Bale is a genius; his transformative, chameleon wizardry is nothing short of miraculous: “The Machinist”, “American Psycho”, “Vice”, “Batman”,  “The Fighter” “The Big Short”; perpetually, his astonishing self-annihilation, donning the DNA of his characters, eludes logic. He soars as Ken Miles, a brilliant and brash engineer and racer, teaming with entrepreneur and automotive designer, Carroll Shelby (Damen, sensitively superlative) in designing a Ford vehicle capable of besting Ferrari at Le Mans, France, the oldest, quintessential 24- hour, “Grand Prix of Endurance and Efficiency”.

“Ford v Ferrari” is owned by Bale and Damon; but cinematographer Phedon Papamichael, garnishes a sterling trophy for the creative intensity viewers experienced through the eyes, hands, fortitude of the drivers; being in the passenger seat, life jeopardized with each watery swerve, fiery implosion, miscalculated turn; hair-raising, heart-stopping, paralyzing titillation.

“Ford v Ferrari’s” true merit lies in its edification of a driver’s relationship with his vehicle; as in any marriage one must respect limits, expectations, that may or may not be met, tolerance, understanding; culminating in a union, greater than the sum of its parts.