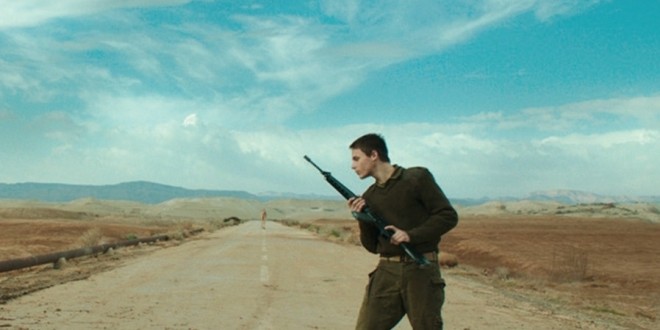 Emotionally flayed from the onset when “Michael and Dafna Feldmann” are informed of their son “Jonathan’s” (Yonaton Shiray) death.  For fifteen minutes viewers are exposed to raw, pulverizing pain; with bleeding souls, and splintered hearts, Lior Ashkenazi (“Footnote”) and Sarah Adler (“The Cakemaker”) hypnotically generate the unspoken magnitude of the insurmountable. Writer/director Samuel Maoz’s complex scenario uses the fluid structure of the dance as a metaphor for life’s choices. Initially the dance is performed by octogenarians in an assisted living institution where Michael goes to tell his elegant but diminished mother of her grandson’s demise.

Shockingly, viewers are dynamited out of psychological purgatory to a desert border, metaphorically called “foxtrot” where four Israeli soldiers (IDF) sludge through their days, traumatizing Palestinians and an occasional camel passing their patrol; partnering with his rifle, a soldier with sinuous ease dances the foxtrot, a therapeutic, cathartic break, hiatus from palpitating sorrow. Living in a corrugated box, which is slowing sinking, mimicking their slippage into moral turpitude; Maoz is a master of the human condition, without duplicity, obfuscations, he understands the situations that alter a man’s decisions, illuminating man’s “inhumanity to man.”

The third time the foxtrot is performed by Michael and Dafna; secrets exposed, reality’s scars accepted; the trilogy, Shakespearean in its enormity, concludes somberly, in a kitchen infused with silenced conversations, haunted happiness, and a morsel of hope.