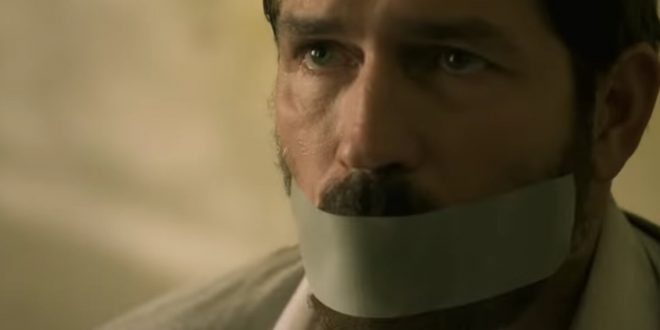 Actor Jim Caviezel (“The Passion of Christ”, “Person of Interest”) is a keen advocative of Catholicism, secure in his proselytism; comfortable in debating its attributes, but open to a dialogue between faiths; his galvanizing performance as “Doug Rawlins”, a Christian blogger, kidnapped by members of the Iranian regime after a conversion plea to a Muslim audience in Cairo, Egypt, is reason alone to visit “Infidel”.

The film directed and written by Cyrus Nowrasteh, produced by Dinesh D’Souza (“Birth of a Nation”), capitalizes on the grey matter, existing between beliefs; bleeding boundaries between religions, cultures, give audiences pause; intransigent convictions sear with authenticity; compromise, unfeasible; Doug, has only to admit that Allah is god, and Mohammad his messenger, to be released.

“Infidel” narrowly escapes sensationalism: legitimate performances, especially by Claudia Karvan as Doug’s wife “Elizabeth” who rejects his faith and works for the State Department; the actor to watch is Hal Ozsan, as Doug’s primary captor, “Ramzi”, exhibiting  menacing, obsequious charm while deploying monstrous, appalling persecution; action pulsates brilliantly in the second half of the film; blending of sects, questing Doug’s release is a mitigating force: righteousness exists despite moral variances.

Supposedly, based in fact, “Infidel” soars as a metaphor in an age of canceled culture; daring viewers to venture outside the box, seeking insight into the “other” regardless of politics, religion, exploring a narrative that binds instead dividing divergent philosophies.