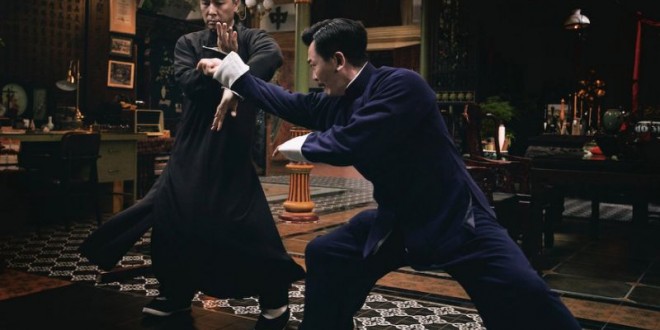 During this ponderous hiatus, waiting for the winners of the Golden Globes and Academy Awards, I periodically step out of my comfort zone, imbibing in genres I know little about and have minimal interest in; martial arts falls into this category; even though a neophyte, I found “Ip Man 4: The Finale” dimensionless, pejorative, sophomorically written but plausibly entertaining in the intricately choreographed fight sequences.

The nonfictional focus is on “Ip Man”, (1893-1972); Donnie Yen’s, stoic interpretation of the Grandmaster of Wing Chun and trainer of the incomparable Bruce Lee, is animated, energized when he defends injustices perpetrated on San Francisco’s Chinese Community, 1964; particularly offensive (not without cause) is the xenophobia practiced by the U.S. Military; Scott Adkins is the metaphor for racism as “Sargent Barton Geddes”, diseased culturally, conscienceless, he proudly wears his bigotry as a medal; his comeuppance earns plaudits as his karate techniques are sacrificed on the altar of Wing Chun.

Amorphous, transparent, shallow characters and a jejune narrative lend mediocrity to what could have been an intriguing biopic; will give me pause when venturing beyond the parameters of my sanctuary, safe filmic zip code.