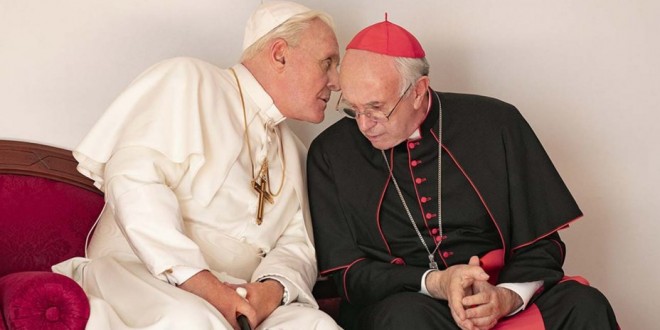 The narrowing of boundaries between theatre and home viewing is a positive controversy; nothing beats the darkened, enclosed enchantment of the theatre, but television affords exposure and participation by those whose time, lives might be stymied by uncontrolled situations; choice breeds inclusiveness; entertainment touching vast numbers in universal spheres. Here are, not just films, but a streaming series, available to anyone owning a television, computer, phone; a phenom worth wallowing in:

You need not be versed in the precepts of Catholicism to appreciate this intelligent dialogue between two men, fated to change each other and multitudes of believers, worldwide. Anthony Hopkins, as Pope Benedict XVI, whose resignation in 2013, dismayed the populace, is dashingly witty, stunningly humble as a man doffing his infallibility; Jonathan Price depicts future Pope Francis with a complexity rarely represented; continuously questioning his role as messenger, spokesman for God; flashbacks of his life add profundity to the film.

Soon to preview its 23rd season; is marvelously addictive; scintillating, effulgent writing and resplendent, innovative characters: forensic pathologist “Dr. Nikki Alexander”, with “a brain the size of Canada” (inimitable Emilia Fox),  teams with fellow scientists “Jack Hodgson” (depicted with iconoclastic, brilliant, volatile finesse by David Caves); “Dr. Thomas Chamberlain” (ingratiating, likeable Richard Lintern) and the most compelling character ever to visit the streaming arena, “Clarissa Mullery”,  (Liz Carr, afflicted with arthrogryposis multiplex congenita) a savant in the world of forensics. Admittedly, I started on Season 13 and have progressed to the present. Hypnotic, what these silent witnesses divulge, scream.