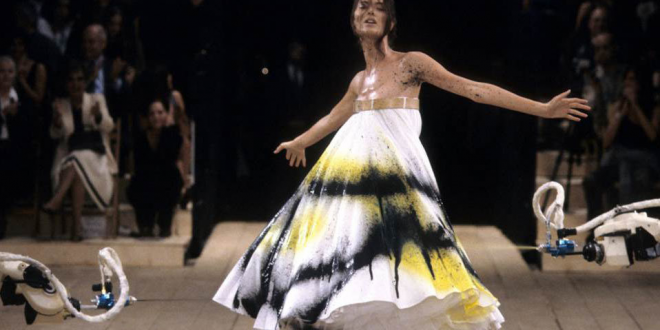 Alexander McQueen would have been forty-nine today; but at the age of forty, the eve of his mother’s funeral, he had had enough and he hung himself. Unlike the fox “who knows many things”, reminiscent of the hedgehog, “who knows one big thing”; he is a behemoth, legendary in the fashion universe; a poor, abused bloke who used his demons to purge his agony and spawn an ecstatic, supernatural haute couture that howls with the emotional chasms that perpetually plagued and eventually devoured him.

Directors Ian Bonhote and Peter Ettedgui’s (also, writer) documentary follows the path of Alexander, “Lee” from his greedy, fearless, ambitious lust for design, to the breathless supremacy of the elite houses, where from a lad in his twenties he reigned; his ascent was stratospherically phenomenal; his genius is lionized in “McQueen” also his mercurial whims, the high and lows of his tortured psyche; from a rotund, gleeful boy to an anorexic, haunted man, resembling, with his increasing notoriety, his skeletal models.

Many interviews with friends, family, coworkers and lovers reveal little of what pulsates, drives, drove him to suicide. He chides interviewers that his clothes are the segway, enlightenment to his inner self; his fashion shows are revelatory:  a blatant, prurient, salacious ugliness, thunderous, bestial, beautiful brutality seethe with imagery of rape, destruction, elements of water, fire, martyrdom featured on runways enhanced by remarkable staging; repulsed, but captivated audiences; iconoclastically, nihilistically his prismatic powers convert the masses.

The Metropolitan Museum of Art’s present blockbuster “Heavenly Bodies”, magnificently displays how the vestments and wardrobes of the Catholic Hierarchy, have influenced designers through the millenniums; Alexander McQueen’s designs are luminously profound, infused with reverence and piety; most telling of all, is a silver crown of thorns, a piece of jewelry, referencing the crucifixion of Christ, a symbol of sanctity, reduced to a bobble of consumerism.

In conclusion, watching the ultimate decimation of a roaring talent, Carl Jung’s prescient comment, “the brighter the light, the darker the shadow” reflects the enigmatic, stunning supernova, Alexander McQueen.