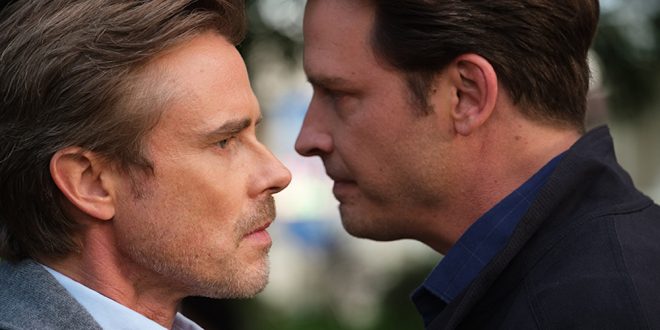 An Australian psychological thriller,  inventively twisted, freakishly fabulous, starring Aden Young as driven, compulsive detective, “Mike Serrato”; his lust for the capture of a serial killer, a fiend with a tattoo fetish (he excises his victims tattoos), creepy in spades; creepier is that detective Serrato has replications of these scarrings tattooed on his body, as reminders of the slaughtered women; consummately paired with actor Sam Trammell as a charismatic, high school Guidance Counselor, “Leo Doyle”, damaged, but a virtuoso at charade.

Writers Katrina Ortega, David Hubbard, Ryan Mottesheard and Thompson Evans masterfully, intriguingly, weave a scenario that intricately dismembers all levels of the male psyche; two men, both married with children, whose histories parallel each other, Catholicism runs its redemptive, forgiving tentacles throughout their lives; families bastardized by unpredicted circumstances; fascinating that “there but for the grace of God”, tables turned, roles reversed; seething at the core, redolently reverberating is the aphorism “the brighter the light, the darker the shadow”; darkness prevails but with a sinister, stunning grandeur.