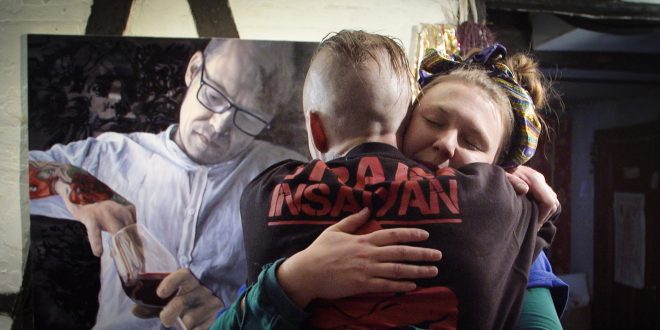 THE PAINTER AND THE THIEF (NORWEGIAN & ENGLISH) HULU

Benjamin Ree’s idiosyncratic portrait of two disparate individuals whose karmic, destined paths collided and blended into an unlikely love story; a documentary revolving around the theft of two paintings by Czech artist Barbora Kysilkova, cautiously removed from a gallery wall in Oslo, and one of the captured thieves, drug addicted Karl-Bertil Norland; as a painter Barbora looks beyond the surface; non-judgmental, her curiosity about why Karl stole her works (her children) is the electric prod that initiates their friendship; “they were beautiful” his words, and she understood; he placates his guilt by acquiescing and allowing her to paint his portrait; shocking intimacy, awe inspiring, pulsating poignancy at the unveiling; speechless, Karl cries in disbelief that he has been seen, studied, acknowledged as a man worthy of an artistic gesture; Barbora graced Karl with an unexpected dignity, legitimacy, unearthing the traumatized child, seething beneath his tattooed presence; but Karl, with innate intelligence, unveils the fissures that have sculpted Barbora’s existence. There is a redemptive discovery, healing and majesty between Ree, Kysilkova and Norland; time spent in different realms did not dissipate their journey: director, painter and carpenter, artists in divergent genres but sharing identical aesthetics.

Pivotally perceptive is Barbora’s fascination with Karl’s permanent markings, stigmata; tattooing catalogues the hidden voice, character of the ignored person; his body, a canvass of consequential, meaningful essence, study of a misguided soul, a cry for comprehension and compassion. Barboro’s own tattoo,  reminiscent of Robert Smithson’s “Spiral Jetty”, symbolizing the perfection of a universe; discovering the capacity of art, in the words of Thomas Merton “to find oneself and lose oneself at the same time.”

“The Painter and the Thief” is an electrifying, illuminating, intrepid analysis of two individuals unafraid of baring their souls and psyches to universal scrutiny.