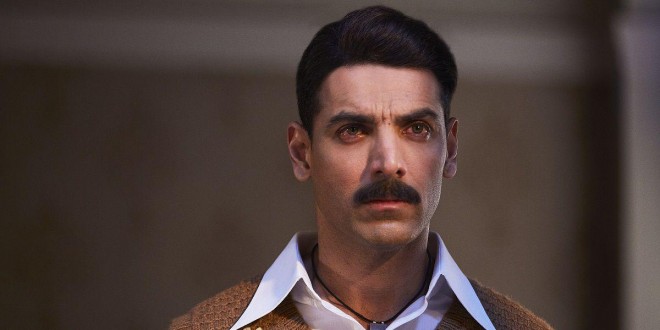 Bollywood’s hunky heartthrob John Abraham (“Force” films) dons three nom du plumes for this spy thriller revolving around the 1971 Indo-Pakistani war (12/3/71-12/16/71)  resulting in the birth of Bangladesh; Abraham is introduced as a droll banker “Romeo” who substitutes his income as an impersonator; he is recruited by RAW’s (Research And Analysis Wing) Chief “Shrikani Rau” (Jackie Shroff at his thinnest) as a covert spy, “Akbar” infiltrating the cabal of Pakistan’s arms dealer “Isaq Afride” (Anil George is legitimately smarmy).

Abraham, worthy of the role, is challenged by a diaphanous script, disjointed transitions; with Teflon facileness, moving unscathed from one unfeasible provocation to another, leaving befuddlement in its wake. Problematic, was the obsessive relationship he had with his mother, “Waheeda” (Alka Amin), pushes the familial boundaries to an awkward edge; with adroitness and perspicacity, plus a few unexpected twists, Abraham, meticulously morphs into his final avatar, “Walter”; concluding an overwrought, but not totally overblown historical interpretation of a brief, but potently damaging 13 days in India’s history (almost 4,000 Indian soldiers perished and 93,000 Pakistani military and civilians became prisoners of war).