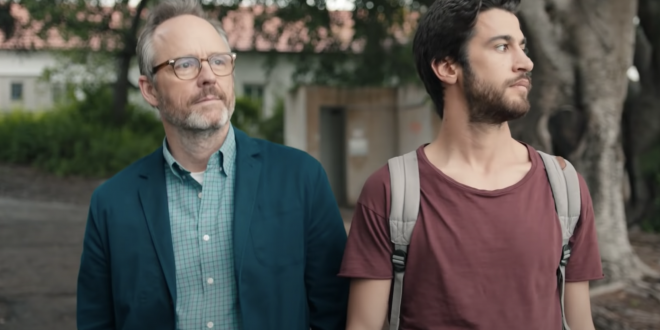 A sensitive, sweet, slice of life, an episode fated to be a preserved, sacred memory: a May/December relationship ignited by two disparate individuals brought together by chance: a NYT’s travel writer “Michael” (John Benjamin Hickey) sublet’s an apartment in Tel Aviv, for five days, from “Tomer” (Niv Nissim); Michael, represents the past, living as a gay man through the embryonic, explosive birth of the AIDS epidemic; he is seasoned, intelligent, comfortable with his existence, sexual identity; Tomer is flamboyant, free to live, love, experiment;  parameters are non-existent, monogamy is anathema; a Chiron, guide to Michael’s education in the hip, unexplored landscape of Tel Aviv’s artists; their switched connection as teacher/pupil is director Eytan Fox’s consummate achievement.

Actors Hickey and Nissim imbue immense dignity, charm and levity in their characterizations of two men whose paths were destined to cross, changing lives, discovering companionship, a “brief encounter” seared indelibly on their hearts and in their minds.