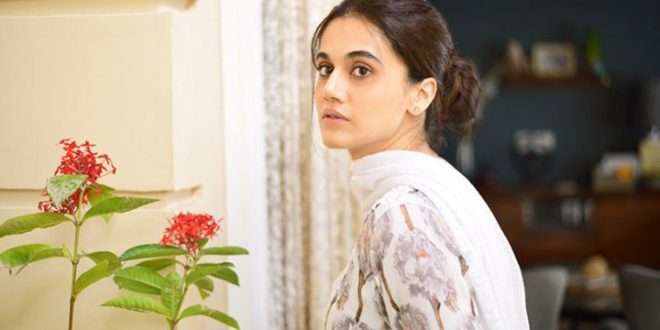 India is a study of contrasts, contradictions, consolidating archival directives and contemporary norms; it is a patriarchal society where women perpetually soar, bamboozle gender expectations; warriors, doctors, scientists, judges even a Prime Minister (Indira Gandhi), they dominate in any field they tackle. But lurking, tainting myriads of marriages, whether “arranged” or “love” is the subservient, submissive role a woman is expected to fulfill, secondary to her entitled, elitist, spoiled husband; it is an epidemic fostered by mothers, taught to their daughters and demanded of their daughters-in-law; men mythically believe it is their inherited right to reign as “masters of their universe”; in some cases wives, little more than slaves.

Director Anubhan Sinha’s “Thappad” serves social justice brilliantly, realistically; “Amrita” (phenomenal Taapsee Pannu) is blissfully happy, married to the man she has loved her entire life “Vikram” (superb, handsome, jerk Pavail Gulati); without an ounce of umbrage she caters his every wish, whim; goes to sleep after him, wakes up before, prepares his tea (she is bereft of cooking skills; her mother-in-law fits this deferential mold); doles out his papers, briefcase and car keys, with dazzling, gushing affection.  The perfect template is smashed to smithereens when, at a celebratory party, Amrita tries to quell an argument between Vikram and his employer; his unexpected “slap” momentarily stymies party participants and viewers; flawless direction scores with timing, guests reactions, but Amrita’s stunned disbelief is the culminating force, shattered to the core, she robotically, joylessly moves about her days, until her epiphany, awakening.

The “slap” is a metaphor vivisecting the totalitarian attitude pervasive in a society that condones such humiliating acts; one slap, one mistake, opening avenues of rejuvenation; ambitiously “Thappad” unveils storms of abuse, physical, psychological, suffered by generations of women, denied their dreams, tolerated because of their status, “wife”.

Timely and terrific, “Thappad” sings to a universal audience.