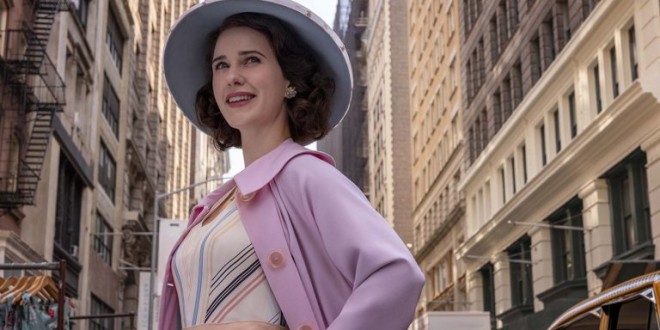 A supernova, diving with lightening speed, into a sea of mediocrity; the dazzling brilliance of the first two seasons, with the exception of a few funny minutes, has been invaded, stalked by voluminous misguided, tragic, supercilious lunacy, idiocy. Why would any viewer want to see Miriam’s parents Abe and Rose Weissman slip into premature dotage by becoming involved with Trotskyites? Willing victims of the “mishpucha” (family) Joel’s parents Moishe and Shirley Maisel; their grating, shrill, stupid encounters are an agelast blasphemy of what was a hilarious familial repartee witnessed in season’s 1 & 2; why was playwright August Strindberg’s “Miss Julie” bastardized by Sophie Lennon, an egomaniac, spewing meaningless, salacious aphorisms, eliciting mainly disgust. Joel’s struggle to rise above his ex-wife’s dynamism is flimsy, droll; jocularity, misplaced. The most egregious wrong perpetrated in the third season is the diminishment of Susie Myerson; one of the most seminal comedic characters birthed in the twenty-first century; quick- witted, foul- mouthed she reigned, a plunger as her staff; we loved smoking, drinking, iconoclastic Susie, manager of the delicious, audacious, innovative Miriam Maisel; a comedy team reminiscent of Laurel and Hardy, Abbott and Costello, Dean Martin and Jerry Lewis; why writers felt a”Susie-flawed” would make her more accessible to viewers is deluded; we anticipated, expected her to control and continue to gift us merriment at stratospheric levels. Mrs. Maisel, with her saucy trot, pixy punim and exorbitant, flashy wardrobe soars with her salty, pioneer performances;  until writers deigned her success should be cauterized, cruelly.

The majesty of “The Marvelous Mrs. Maisel” lies in it universal appeal; a series dominated by a 100% Jewish theme, ignited the curiosity of nations; with no apologies or obsequiousness the idiosyncratic protagonists revel in their culture, poke fun at their hubris, heartily laugh at themselves and at each other, infecting multitudes. “The Marvelous Mrs. Maisel” plummets from a pinnacle of riotous joy and happiness, that left audiences addictively clamoring for continuance, into a dungeon of disappointment. What happened? Is Midge relegated to going home, raising the kids, making briskets? Is this a conundrum capable of resuscitation? Who knows, or even cares?