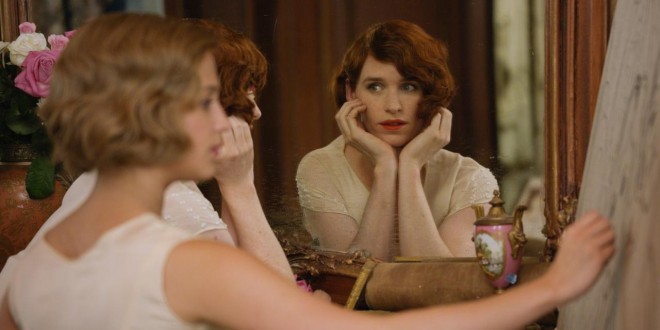 “Girls Lost” (Sweden) was a jewel in the crown of the 51st Chicago International Film Festival; focusing on three pubescent girls in yxtreme emotional havoc, warring with their obvious facades and internal identities; unfathomable, unimaginable pain for those unfortunate to be imprisoned in a limbo of sexual ambiguity.

Eddie Redmayne soars in the role of transgender “Lily Elbe” (1882-1931)/ landscape painter Einar Wegener, married to artist Gerda Wegener (1886-1940), equally mesmerizing, Alicia Vikander. “The Danish Girl” directed by Tom Hooper, based on the novel by David Ebershoff and Lily’s autobiography, “Man into Woman”  is a prescient topic in today’s world of correcting nature’s or man’s “misconceived”.

The film commences in 1926, Copenhagen, where Einar and Gerda joyfully and emphatically in love (married in 1904) pursue their distinct artistic genres; Einar, repetitiously painting a single theme, solitary trees in a lonely, lovely terrain; Gerda, flamboyantly portrays portraits of staid gentlemen and lanky, lusty, smoking women in the Art Nouveau fashion. A missing model inspires her to press Einar to pose in the woman’s place, hence the emergence of the long dormant “Lily”.

“The Danish Girl” painstakingly forges the hellish trail Einar, Gerda and Lily navigate until the discovery of a doctor in Berlin who performed sex reassignment surgery; Redmayne is transformative, translucent as he sheds all vestiges of Einar, allowing the petulant, flirtatious Lily free to howl her femininity; Gerda, torn between her love for the man and the woman continues to gorgeously, heartbreakingly splay Lily’s enchantments across the canvas.

“Middlesex”, 2002 Pulitzer Prize winning novel by Jeffrey Eugenides was an eye-opening treatise on the nature of “intersex”:  individuals born with external genitalia and internal reproductive organs; doctors make decisions, resulting  in unintentional, monumental physical and psychological agony. The twenty-first century is striving to bludgeon the intolerant, dogmatic, ostracized behavior towards those cursed/chosen from birth to be the “exception”.

“The Danish Girl” at times seeps into the sensational but stuns with its magnificent cinematography, directing, and pivotally profound performances by Redmayne and Vikander.