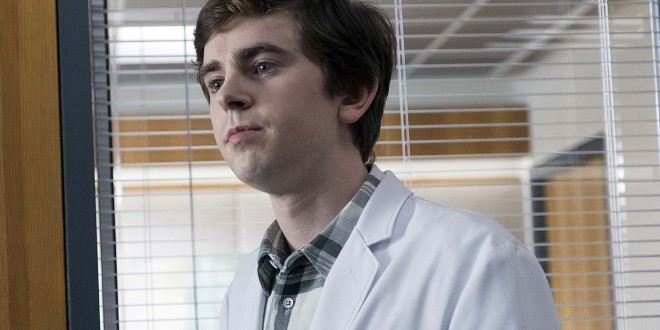 Never have I encountered a more compelling, fascinating, enchanting character than “Doctor Shaun Murphy”, played sensationally, inimitably by Freddie Highmore; afflicted with autism/savant syndrome, his diagnostic dexterity matches iconoclastic “House” (Hugh Laurie); Dr. Murphy is filter-less, caustically correct, not only with a patient’s illness but imperfections in his/her deductive reasoning; his brilliance is tempered by loneliness, isolation, fear of friendship but desperately longing for it; achingly vulnerable, in its second season, Shaun is evolving, gaining confidence, and a sacred place in the hearts of viewers.

The ultimate triumph, is the destruction, flaying the myth of autism; clarification of the “spectrum”, no longer to be shied from, shunned; it is not a disease, and is treatable; Dr. Murphy, as others sharing the syndrome, can be highly functional, accomplished, accessible but still exhibit agitation when touched, inability to establish eye contact, hyper-freneticism; “The Good Doctor”,  soars with its lessons, its understanding of man’s proclivities, idiosyncrasies, anxieties.  Dr. Murphy awakens sensitivities, profoundly moving one to tears, laughter, joy and heartache. In the end I have never met a fictional character so deserving, worthy of love!

2018-10-31
Peneflix Admin
Share !
Previous: THE HATE YOU GIVE
Next: BOHEMIAN RHAPSODY