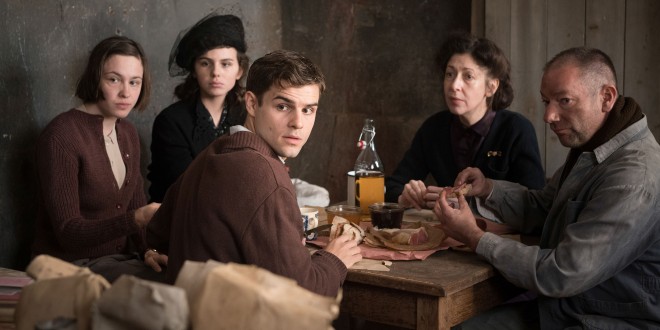 1,700 Jews survived World War II living in Berlin; “The Invisibles” is Germany’s remarkable testament, lauding the indomitable survival instincts of four who defied the odds and lived. Archival interviews with the aged survivors, interspersed with actors depicting their youthful travails, is riveting filmmaking; director Claus Rafle, without blinders, creates a masterpiece, recognizing  not only the temerity of the Jewish youth, but the “red badge of courage” deserved by their protectors, even a major Nazi official.

The Magnificent Four are metaphors for all those who refused Nazi domination, disavowing egregious Nuremburg Laws, 1935 (pollution of German Blood and Honor by Jews, leading to their systematic annihilation), despite harrowing, tension-infused incidents, still laughed and rejoiced at their insane, extraordinary fortune; disguised as a war widow, a Hitler Youth, domestic servants, a forger whose artistry allowed many to escape the ultimate holocaust; casting off the vestiges of a rejected clan (primarily the yellow star) donning the personas of ordinary Germans, they became Thespians of the New Order; destined ephemerality.

Rafle, with graphic scenes of Berlin’s cataclysmic destruction, gifts an element of amazement, stunning wonderment that any living creature could emerge from such staggering chaos.

“The Invisibles” a docudrama of stupefying endurance, instead of gloom, leaves one euphorically reveling in hope and astonishment; cultures, civilizations targeting the elimination of the Jewish people are “gone with the wind”, while they perpetually persevere.

2019-02-07
Peneflix Admin
Share !
Previous: THE LEAST OF THESE: THE GRAHAM STAINES STORY
Next: WHAT MEN WANT