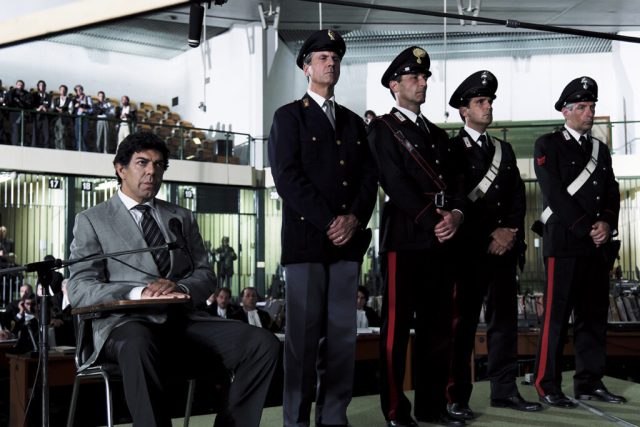 Director Marco Bellocchio’s “The Traitor” is blatantly honest in its depiction of the elitist microcosm known as the Cosa Nostra/Mafia: intransigent rules are enforced by its familial corps; extinction to those whose choices, actions go against the aged manifesto, a code of conduct, silence “omerta”; so keen is their elimination process, collateral damage is minimal. Tommaso Buscetta (1928-2000) was the first major figure in the Sicilian Mafia to go rogue, turncoat, a quisling, resulting in the conviction of approximately 400 members of the Cosa Nostra in Italy and New York; Buscetta’s trigger was the murder of two sons, brother, nephew; extradited from Brazil, where he was a drug kingpin, to Palermo, Sicily; the “Maxi Trial” of the century lasted from 1986 through January, 1992, purging the Mafioso of its major hierarchy.

Cutthroat, courtroom deliberations between Buscetta (brilliantly performed by Pierfranesco Favino) and multitudes of miscreants, savagely realistic; more than “The Godfather”, “GoodFellas”, “Scarface” here is truth/authenticity/veracity glaringly, pungently transparent. Bellocchio culls from his geographical Italian background, lacerating to the core the levels of amoral, barbaric behavior, exhibited by those who in actuality, never had a career choice.

“The Traitor” is a comprehensive study of a demonic milieu; witnesses who rile against it must hide for eternity behind assumed identities, perpetually looking over their shoulders, fearing the avengers of the cult.