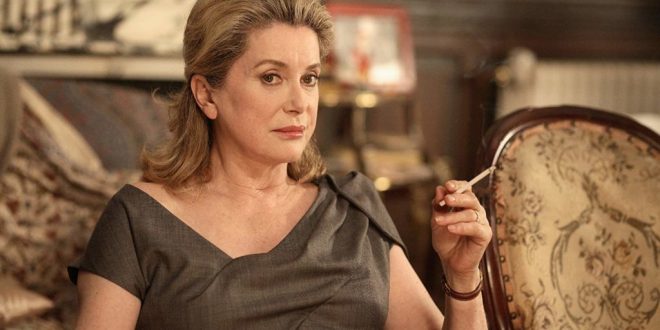 THE TRUTH (FRENCH/ENGLISH) ON DEMAND

Unerringly poignant, sublimely sensitive, an exquisite story within a story directed by Hirokazu Koreeda (“The Shoplifters”); actors Catherine Deneuve and Juliette Binoche, imposingly comfortable in their craft are commanding as a mother/daughter team, with unresolved issues; Deneuve, “Fabienne” at the nadir of her career as a scion of the film industry, struggling with memory deficiency, has written a fabricated autobiography; Binoche, is her daughter, “Lumir”, a screenwriter, arrives in Paris with her daughter, “Charlotte” (Clementine Grenier) and husband “Hank” (perpetually unscrubbed, Ethan Hawke, an appendix, not really necessary, but left the film unruptured), greeted by a mother whose charismatic history is effaced by nature’s alterations: unwanted girth, fragility, advancement of younger, equally gifted performers; too much hair, makeup, an ego, refusing deflation; Lumir, watching Fabrienne wrestling with her role in a film mimicking their past, comes to terms with their vulnerabilities.

“The Truth” comprehensibly, with majestic intelligence, and splendid depictions by Deneuve and Binoche, treat viewers to the complexities of being an icon among mortals; dependents, ignored, unnoticed, shadows in the sunshine; achingly watchable, lessons abound and elucidate in this awe-inspiring movie.