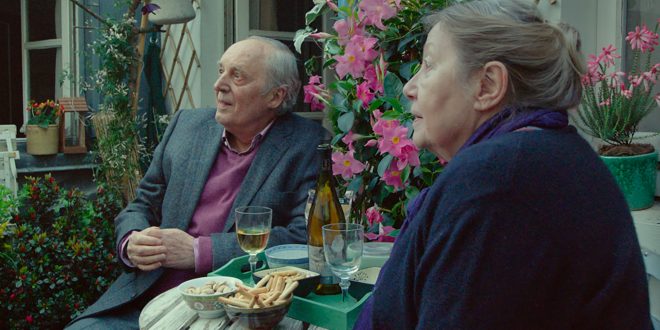 Dedicated “To all those whose brains will decompose before their hearts”; directed by Gasper Noe, “Vortex”, filmed as a diptych, a metaphor for the bifurcation of two lives, once entwined, now irrevocably fractured by age and its devastating vicissitudes; a husband and wife, “Liu” and “Elle” (incomparable Dario Argento and Francoise Lebrun) navigating the once familiar, now foreign, unknown terrain of home and neighborhood; Elle: a retired psychiatrist, self-medicating, confounded by Alzheimer’s, voraciously devouring her cognitive process, dignity and will; Liu: writer, wrestling with his ailing wife, literary prowess and compromised heart. Achingly, their only son “Stephane” (Alex Lutz) with unadulterated love, searches for the couple who raised him, cherished him and graced him intelligence; it is his story, a bludgeoning, horrifying slice of reality, irreversible, and shared by multitudes; disease that knows no parameters, brilliance, luminosity in tandem with mediocrity and uninspired, allotted the identical fate.

Lovers of the “grey area” should invest in the latest dissection of Michael and Kathleen Peterson’s marriage, progeny, financial distress and death. With turpitude, after viewing the myriad of previous exposés I ventured into the world of obfuscation, permeating this tale; compliment my decision, primarily because the writing and acting are sublimely intense: Colin Firth’s depiction as novelist Michael Peterson is layered in bathos, ruminating hubris, empathetic angst; he astounds as a shocked, grief stricken, but enigmatic spouse. His every scene is peppered in charismatic conviction; Toni Collette, as Kathleen, is another step closer to the pinnacle of her potent career. At this point, hearty confusion is satisfyingly refreshing.

“Hieronymus Bosch” (Titus Welliver) is back, and the tattooed tiger is as ferocious as ever; an unbridled investigator, minus law enforcement restrictions, his prescient skills envelop the entirety of the scenario. His daughter “Maddie Bosch” (Madison Lintz) is a neophyte on the police force (yet to be seasoned, but whip sharp) and “Honey Chandler” played by Mimi Rogers, Tom Cruise’s first wife, is colossal as a recuperating, revenge seeking attorney. There is an elevated comfort level in watching “an old dog” employ new tricks in crime solving.