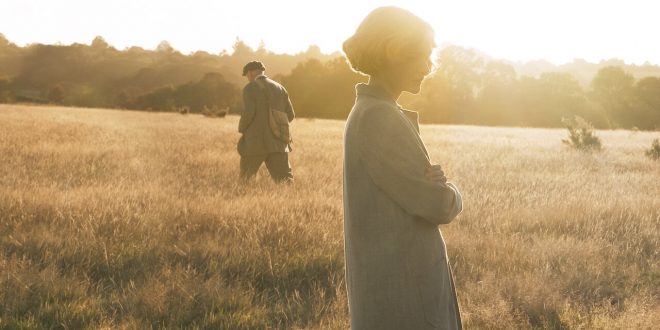 A DIG (IN THEATRES & NETFLIX)

Awash in bucolic dignity “A Dig” directed by Simon Stone, is a film that is sublimely comfortable, comparable to a well-worn sweater, an unassuming evening with a forever friend, cloaked with time’s cherished reminiscences; an untarnished English landscape; practicing RAF pilots, the only hint of upcoming transitions; it is 1939 and wealthy widow, Edith Pretty (a noble, gifted performance by Carey Mulligan) executes a lifelong ambition to excavate ancient mounds, dwelling surreptitiously on her property; hiring Basil Brown, (Ralph Fiennes gives a pure, enlightened adaptation of a humble, self-taught genius) an excavator, to compromise, interrogate these secretive, intimidating interlopers; flawlessly, rhythmically the storyline evolves with expected travails: a superb discovery leads to the pedantic policies of the British Museum; love lost and discovered with seasoned and neophyte archeologists; beautiful, blossoming friendship between young Robert (Edith’s son, Archie Barnes) and veteran Mr. Brown; highs and lows meld whimsically, extolling, at times magnifying, the veracity of the tale, which at its heart, resonates with the precarious preciousness, fleeting harmony, of an era long extinct but like the unearthed prize, throbs in the memories of those tempered to respect, awe,  even mimic the accomplishments of their predecessors.