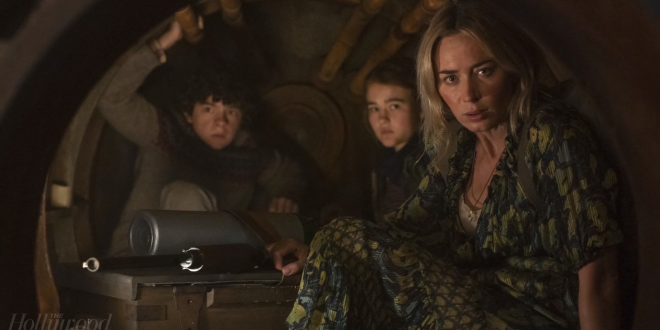 A QUIET PLACE PART II & PROFILE (BOTH ONLY IN THEATRES)

Director John Krasinski’s second film about the hunted, haunted Abbott family is surprisingly better than the earlier “A Quiet Place”; it is tautly structured, synchronicity weaves its compelling coincidences involving humans out-maneuvering aerial aliens, keenly sensitive to sound, and presciently frightful to behold; there is magic in its meaning and profoundly acted by the previous cast, and a new member of the stalked: Emily Blunt whose Oscar worthy performance, as “Evelyn Abbott” in the first film was my prime reason for returning, but the unlikely, victorious, intelligent heroes are the children, “Marcus” (Noah Jupe) and “Regan” (remarkable, deaf Millicent Simmonds); brilliantly, the scenario revolves around sound and its frequencies; concentration is demanded of viewers, gratification guaranteed. Added to the medley of hounded is Cillian Murphy (“Peaky Blinders”, “Breakfast on Pluto”) an Irish actor whose innate transformative skills lend integrity to “Emmett” whose wife and son no longer exist; he channels his newly discovered humanitarianism as the protector of “Regan” in her quest for preservation.

Alarming, appalling true tale of a French journalist, whose book “In the Skin of a Jihadist” the film is based on. “Profile” stars Valene Kane as British infiltrator “Amy Whittaker” and Shazad Latif as “Bilel”, a Svengali, whose cultish charisma beguiles “Amy/Melody” and sucks her into the dehumanizing realm of women, shamelessly marrying Jihadists, naively accepting a killer premise. Director Timur Bekmambetov’s ingenious use of the computer and contemporary “catfishing” is ambitiously distorted, but emphatically chilling. Actors Kane and Latif create a believable schema; terrifying tension grips viewers, riveting, releasing its grip only after its spellbinding conclusion.