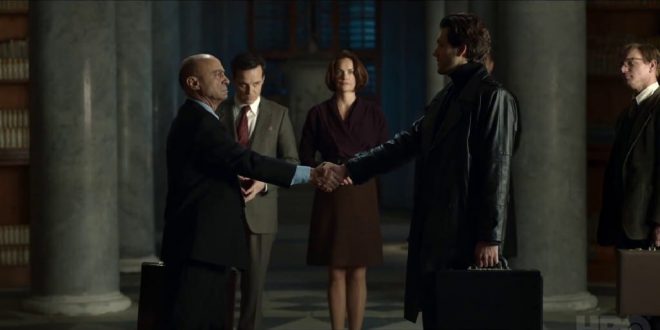 OSLO (HBO) VS CRUELLA (THEATRES OR DISNEY PLUS)

“Oslo”, based upon the Tony Award- winning play (J.T. Rogers), which is gloriously reminiscent and equally worthy of experiencing as a film, choreographs an incredulous moment in history: the power of a visionary couple blending intransigent advisories, Israel and Palestine, channeling their missions into a viable solution for peace;  Ruth Wilson and Andrew Scott with remarkable aptitude depict Mona Juul and Terje Red-Larsen, the Norwegian couple who orchestrated an unprecedented juncture in time, leading to the 1993 Oslo Peace Accords. Superb characterization by the individual protagonists infuses the production with Herculean insight into mighty men, with the supreme potential to save their countries and peoples from further spoliation and slaughter. Expectations “go oft astray”; the fateful day, September 13, 1993, in retrospect was a supernova: President Clinton, Minister Rabin, Chairman Arafat, with a handshake seen round the world, proved amorphous, nebulous, destined for death.

With questionable judgment I watched this ghastly excuse of a feminine revenge flick; with nary a scintilla of charm or fascination, audiences are feted to an encumbered costume blitzkrieg; one staggering design after another, desperately and unsuccessfully fails to mask a dull and supercilious script. Emma Stone and Emma Thompson, with faux aristocratic accents, are the center of the avaricious quest to best each other in the one-dimensional, acquisitive realm of fashion. Watching at home and paying the price ($29.99) demanded by Disney Plus; knowing within the first ten minutes that my worst nightmare would be realized; after 2h 14m, anguishment replaced by relief.