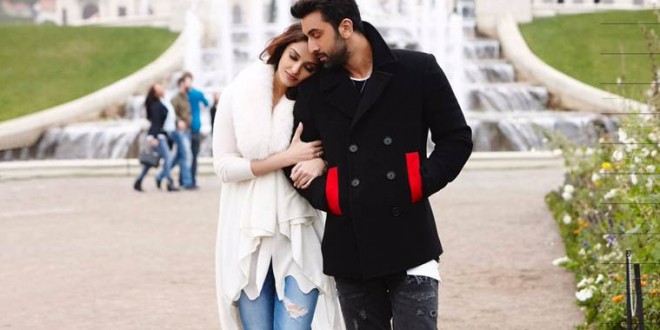 If you survive the first hour wallowing in the abyss of silliness, manufactured mimicry, saccharine sophism, entertainment blossoms with the astounding radiance of Aishwarya Rai Bachchan, in  this predictable, weepy scenario. Rambir Kapoor and Anushka Sharma star as a two-sum: “Ayan” (Kapoor) wants more than friendship from “Alizeh” (Sharma) who is satisfied with a “huggy”, platonic relationship; their song and dance numbers (both soar in that department) are vibrantly, vividly filmed and director Karan Johar stimulates tear ducts with their peak and valley  saga. Aishwarya as “Saba” the alternative love interest, a poet, has little to do, but fire up the screen with her blazing beauty,(stunningly sufficient), for that she received top billing. A cameo role by Shah Rukh Khan as Saba’s ex-husband added a tiny growth spurt to the stale plot.

Just when I thought Bollywood was diminishing the boundaries between Eastern and Western audiences “Ae Dil Hai Mushkil” proves that these ubiquitous themes are still pungently powerful with non-Western viewers.