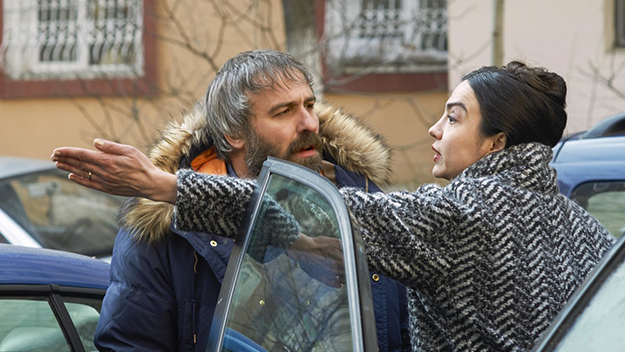 Director Cristi Puiu (“The Death of Mr. Lazarescu”) won the Silver Hugo Award for the Best Director of this highly unforgettable family saga.

“Sieranevada” (misspelled, intentional poetic license), claustrophobic, tense, traumatic, intimate analysis of a family in flux. The film is flawed but its ambitious intentions succeed on a massive scale, especially in writing and direction. The patriarch has died and the family gathers in the matriarch’s miniscule apartment for an Orthodox cleansing; the deceased’s spirit is released from his earthly transgressions only after a survivor dons his clothes; hilarity ensues with the scapegoat’s fashion travails.

The unspoken genius of “Sieranevada” lies in its understanding of the grieving process; pain of loss can trigger egregious behavior, behavior rarely manifested under normal conditions; for three hours viewers witness, not just the purification of the deceased, but the purgative scouring of the survivors.

Puiu is a New Wave film maker along with Christian Mungiu (“4 Months, 3 Weeks and 2 Days”, “Beyond the Hills”), Corneliu Porumboiu ( “12:08 East of Bucharest”), Radu Jude (“Aferim”).  “Sieranevada” is stunningly worthy of its awards.