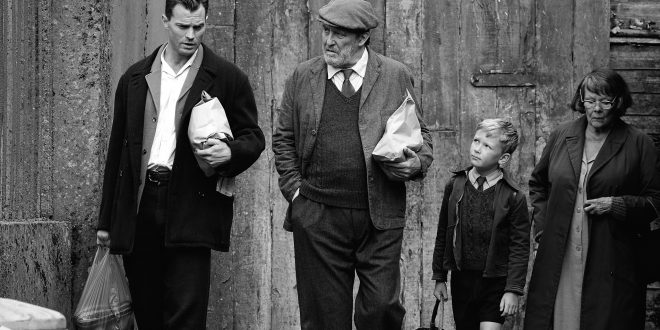 Recognizing a director’s difficulties in recreating one’s past for film: personal observations competing with historical accuracy, capturing the child’s eye with an adult perspective, unnecessary glorification of events and its participants; Kenneth Branagh (1960-) fares better than director Paolo Sorrentino’s “coming of age” tale in this year’s “Hand of God” but not as well as Alfonso Cuaron in 2018’s “Roma”; that being stated “Belfast” is a warm, tender story about a prodigious nine-year-old thrown into the chaos of religious hostilities in 1969 Belfast; a year of horrific violence, referenced as “The Troubles” striving to eliminate the strife between minority Catholics and the Protestant government; ugliness lasting almost thirty years, resulting in the exodus of thousands. “Belfast’s” success lies in the characterization of “Buddy” (remarkable debut performance by Jude Hill), a young lad aware of the conflict but dedicated to his home; witnessing the discord between his parents’ “Pa” and “Ma” (Jamie Dornan and Caitriona Balfe) revolving around their future, he is understandably frightened about being torn from the familiar, his happiness disrupted and beginning anew; realistic pain is palpable.

Poignant minor performances by Judi Dench and Ciaran Hines as Buddy’s grandparents, representing the past, immobile, but achingly recognize a doomed future for their loved ones; Branagh’s respect for these humane and wise souls is infused with tenderhearted love and compassion.

Courage pulsates at the core of “Belfast”; questing, pursuing a healthier, happier tomorrow resulted in nurturing the genius lying at the root of “Buddy’s” soul.

2021-11-15
Peneflix Admin
Share !
Previous: PASSING (Netflix)
Next: YEAR OF BENEDICT CUMBERBATCH: THE MAURITANIAN (Netflix); THE ELECTRICAL LIFE OF LOUIS WAIN (Netflix); THE POWER OF THE DOG (in theatres)