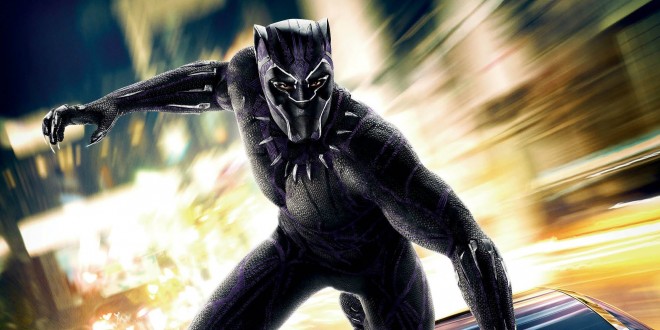 What clings to one’s memory is the terrifying timeliness of “Black Panther”; a country that holds the tool to enhance mankind, isolationists led by a sensitive, flawed monarch, “T’Challa, Black Panther”; he heeds the advice of women; follows the rules of warfare, acts propitiously on the scholarship of respected colleagues. “Black Panther’s” wizardry lies in its transcendence of race, creed and even previous Marvel films.

Nestled in the fictional African country of “Wakanda”, is the powerful alloy, “Vibranium” impenetrable, made from a fallen meteor, its mystical characteristics constitute the Panther’s suit of armor.

Director/writer Ryan Coogler (“Fruitvale Station”) partnering with prodigious actors: Chadwick Boseman (“Panther”), Michael B Jordan,(“Killmonger”) Lupita Nyong’o, (“Nakia”) and my particular enchanting favorite, Letitia Wright, (“Shuri”), gifts viewers a super hero of divine and mortal proportions. Boseman’s insightful depiction of a monarch who questions, separates the Panther’s skills from a man who acknowledges his lack of infallibility, accepting his vulnerabilities as a human.

Minimally versed in the Marvel Culture there are obvious references to “Q” in the “James Bond” saga; Shuri, T’Challa’s sister, the maven of technological gadgets, protecting both the Panther and the nation from mendacious forces. Staggeringly visual, Wakanda’s landscape is infused with pulsating waterfalls, magical mountainous terrain; tattooed citizens wear their affiliations, accomplishments with unabashed, stunning pride and individuality. Shakespeare rears his ubiquitous influence as T’Challa, upon on the murder of his father (“Hamlet”) fears that “uneasy lies the head that wears the crown”.

The core, primary message of the film lies in the character, “Erik Killmonger”, (profound, contemporary performance by Michael B. Jordan), nemesis of the Panther; born in Wakanda, ripped from his roots, raised in Harlem; soaring, with exceptional intelligence, he harbors the angst of displacement, separated from his birthright, questing a return to Wakanda, usurping King T’Challa, his legitimate bitterness stunts his reason, seeking revenge on a Biblical scale. He is galvanizing, complex, a fascinating metaphorical force for those, not only driven, stolen, from their natural habitat, but anyone who is labeled “different”, an outsider, cauterized from the norm.

“Black Panther” allows “Amazonian” women to blaze beside supermen; choreographed brilliantly are the battle scenes, equality between the warriors is magnificent in its political correctness. The charismatic Marvel Panther, more than a comic creation, is a compelling lesson in life and self-awareness; a film astounding in its universality.