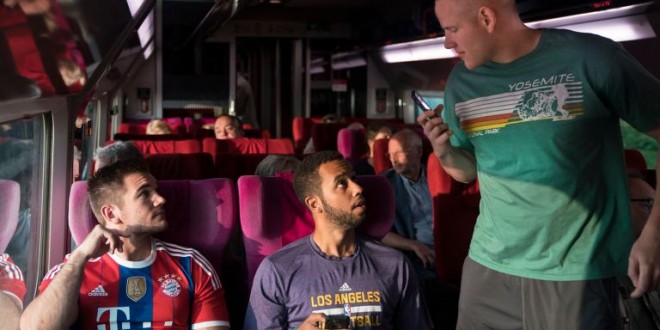 Spencer Stone, Alek Skarlatos and Anthony Sandler are contemporary heroes; they fearlessly saved 500 lives at the risk of loosing their own; they will be lionized forever in the laurels of champions. On August 21st, 2015 they thwarted an armed terrorist on a train from Amsterdam to Paris. Their bravery was rewarded with the French Legion d’Honneur.

They are intrepid, inspirational but they are not actors and director Clint Eastwood was misguided in having them depict themselves in their autobiographical, valiant narrative. The performances are rigid, the dialogue jejune; moving at a molasses, yawning pace, viewers suffer an ennui on a tsunami scale.

As children they are mischievous, frustrated by school, religion and personal choices; Spencer and Alex join the Army and all three connect in Rome, as sight seekers; the film sinks as they ploddingly, benignly, progress to the preordained train ride.

Tom Hanks defines a hero as someone who “walks voluntarily into the unknown”. Spencer, Alek and Anthony, run!