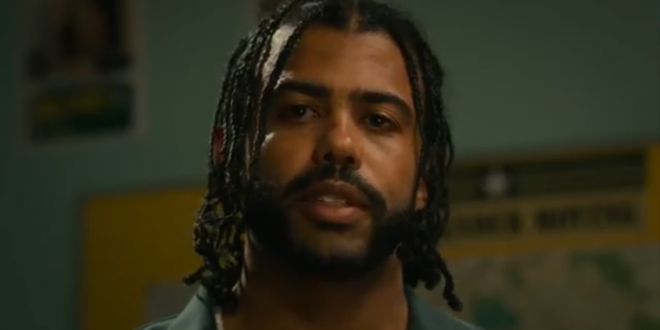 “When a situation or image can be interpreted in two different ways. You have a blindspot to the second interpretation.”  Writers/stars of “Blindspotting”, Daveed Diggs, “Collin” and Rafael Casal, “Miles” in a tightly-constructed, taunt three-day episode, prove the validity of this precept. Collin’s probation (initially unsure of what’s earned his incarceration) is nearing its completion; following the stringent rules for almost a year, lends heart-palpating tension to the scenario; Miles, his erratically explosive friend, a “wannabe” African American, can “rap” with the homies, adores his wife “Ashley” (Jasmine Cephas Jones) and biracial son “Sean” (enchanting Ziggy Baitinger) but there is a seething, lethal temperament writhing beneath his jocular surface.

The action’s landscape is the newly gentrified Oakland, Ca. where Collin and Miles are employed by a moving company; their locations are metaphors for the changing demographics in the neighborhood; simultaneously a blending and clashing milieu; lenient erasing of racial barriers but a blatant emphasis on police brutality; Collin’s nightmares scream at his lack of accountability, fear of going to the authorities; Miles’s flagrant disregard for civility escalates lethally as Collin’s probation nears its end.

“Blindspotting”, directed by Carlos Lopez Estrada, flirts with greatness in two stratospherically stunning monologues, shared by Collin and Miles; traumatic fragmentation redefines their friendship. Unafraid of tackling problematic issues, here is a film that indubitably sheds remarkable light on pervasive cultural dilemmas, yet to be solved.