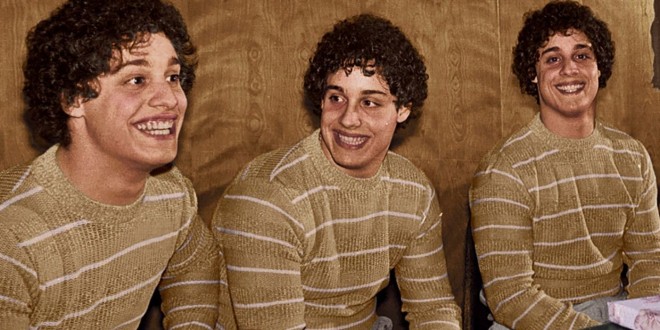 On July 12th, 1961, identical triplets were born and placed in three separate homes; the adoptive parents unaware of the brothers. In 1980 Robert Shafran, on his first day at a community college, is mistaken for Edward Garland, hence commences one of the most karmic connections in history; an electrifying documentary (directed brilliantly by Tim Wardle) that focuses on the reunion of the brothers and the “fate and fury” that secretively studied their behavior through their seemingly benign childhood; at nineteen they were dramatic oddities, celebrated worldwide, guests on every talk show, they mimicked each other, shared hobbies, smoked the same cigarettes; their halcyon behavior sensationally splayed in all the tabloids, pulp fiction realized, until the cancer informing their separation comes to the fore.

From birth, the boys and their families were masterfully manipulated; disparate backgrounds: Eddie’s father was a disciplinarian, a teacher; Robert’s more affluent father, a doctor; David Kellman’s father was an immigrant, owning a small grocery store; each family had an adopted older sister (surprisingly, they were not interviewed); Louise Wise Services was the origin of deviousness; researcher Lawrence Wright uncovered the study formulated by Dr. Peter Neubauer (1913-2008), a prominent child psychiatrist, whose fascination with identical twins, ignorant of each other’s existence, led to his premise of “Nature vs Nurture”, genetic vs environmental. Most of his findings, murkily lie at Yale University, sealed until 2066.

“Three Identical Strangers” poignantly, painfully traces the opulent days of discovery, magnetic smiles and playfulness, splendid rise from anonymity to empowerment to the shrinking of the bloom, confoundment at their differences; vague creepiness, aura of decadence, unanswered questions, resonate with the subjects and those exposed to untoward, egregious experimentation.