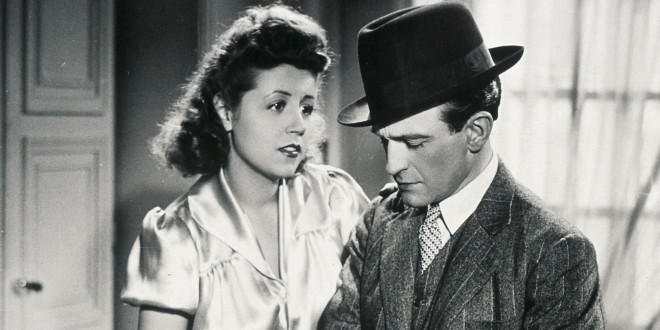 Director Henri-Georges Clouzot (1907-1977) the eminent emperor of French film noir (his American counterpart, Alfred Hitchcock) is rising from the morgue, via digitally enhanced classics; “The Murderer Lives at Number 21”, made in 1942, during German occupation of Paris; black and white, as in the archival photographic process, cements viewers concentration on the characters; scintillatingly diverse, wickedly witty, Clouzot’s prodigious skill seduces, instantaneously, one’s inquisitiveness. A classy serial killer, with aplomb, leaves his calling card, “Monsieur Durand”, on his selected fatality; the authorities are dumbfounded, paranoidly perplexed, humor infuses their bafflement. With aerobic deftness, brilliant dialogue is delivered with fusillade intensity, testament to the overpowering artistry of the actors.

Pierre Frensay is mesmerizing as “Inspector Wens” a sovereign of subterfuge, infiltrating the boarding house (Number 21) where Monsieur Durand, might be hibernating. Raymond Bussieres, gives a virtuoso depiction of a duplicitous “flimflam” man “Jean-Baptiste”, injecting Shakespearean comic relief into the scenario. But the real glory goes to Suzy Delair (1917-), an electrifying comedian (Lucille Ball is a close second), “Mila Malou” whose triumphant, operatic voice (“Quai des Orfèvres“), ditzy sensuality, lend magical bliss to her every scene; supreme talent is a prerequisite for a bonafide comedian; she owns it in spades.

Encouraging, that a sold-out theatre stepped back seventy-six years, exchanging for a brief episode, modernity’s trendsetting, for the escapades of the marvelous, gimmick-less, 1940’s, awash in nostalgia, in awe of what once was, leery of what is to come.