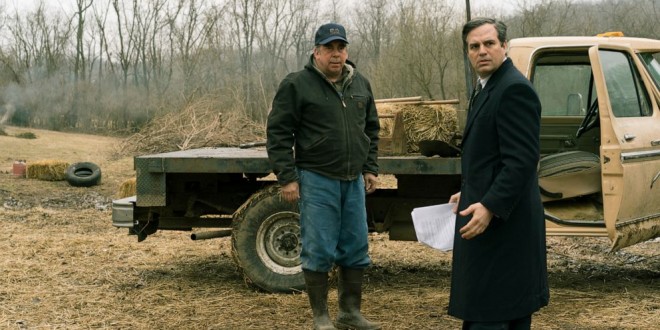 More than intelligent “Dark Waters” elucidates one man’s remarkable feat in besting and forcing accountability from a behemoth of corporate malfeasance, DuPont; it took years of Herculean efforts to bring the egregious, criminal dumping of toxic waste into the waters servicing the people and livestock of Parkersburg, West Virginia; Mark Ruffalo invests, corporate defense attorney, Robert Bilott, with unflinching integrity, tenacity and courageousness, in tackling a company that did all in its power to “save face”, knowing they were poisoning and killing at whim; Bilott, lionhearted, undaunted, is still championing the unheralded; initially, Wilbur Tennant, (staggering, Bill Camp) a cattle farmer, presents the unsuspecting Bilott, with videos of the devastation, via ponds, that had been plaguing Parkersburg for years, convinced DuPont Chemical Company was the established culprit. “Dark Waters”, directed by Todd Haynes, produced by Mark Ruffalo, is a film of such depth and refinement that the subject transcends the performances.

Rob Bilott, “The Lawyer Who Became DuPont’s Worst Nightmare” (2016, New York Times article) stunned actor Mark Ruffalo; he reached out to Bilott, and the fantastical tale is on the screen; in October, 2019, Bilott published “Exposure: Poisoned Water, Corporate Greed, and One Lawyer’s Twenty-Year Battle Against Dupont”.

Robert Bilott is a hero, now saluted, sung, applauded: “the characteristic of genuine heroism is its persistency”, Bilott is the optimum exemplification of persistence conquering, butchering resistance.