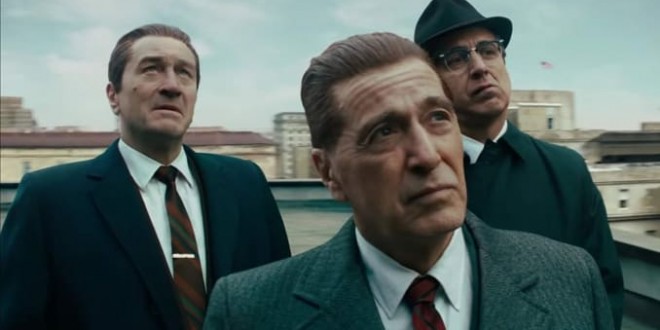 Without the quilt of a quisling, or Judas Iscariot, I imbibed for three and a half hours in Martin Scorsese’s epic narrative of mob culture, in the comforting confines of my home; instead of feeling cheated of the darkened theatre, I felt a surprising intimacy with the characters; up close and personal, aided by digital age-erasure technology, the major protagonists advance through life’s physical diminishment.

“The Irishman”, based on the 2004 memoir, “I Heard You Paint Houses” by Charles Brandt (lawyer and prosecutor) uses license in depicting the unproven demise of Jimmy Hoffa; Frank Sheeran’s story of his profession as a hit-man is blazingly portrayed by Robert De Niro, grasping the intricacies of a man who “paints houses” with a gun, simultaneously earning a grudging respect, empathy, is a triumphant tour de’ force; De Niro at his pinnacle.

Joe Pesci as Frank’s mentor, Russell Bufalino, soars as a lethal weapon with charm, sagacity and quiet, demonic potency; their scenes together ruminate with a keen friendship but there is never a doubt or hesitancy as to who is master.

The pulse, nucleus of “The Irishman” lies in the relationship between Jimmy Hoffa, President of the International Brotherhood of Teamsters union from 1957-1971, and Frank; despite a lack of resemblance, Al Pacino is mesmerizing as an obsessive, megalomaniac; his blinding arrogance, taunting intolerance; scenes with “Tony Pro” (Stephen Graham) riddled with bigotry, forecast his demise.

Screenwriter Steven Zaillian cuts to the quick the temperament of mob mentality in the 50’s, 60’s, 70’s; their warped justice system, defined turf territories, making sense of a code of immorality; the moral compass, minimally, put vigorously rests with Frank’s daughter Peggy (Anna Paquin) who perceives his turpitude and cauterizes him from her existence.

The flaw rests in its length; the first three hours were masterfully performed and executed; concluding portion was progressively plodding, Frank’s mulling his career choices; lack of validity in parenting; contemplating forgiveness within the dictates of Catholicism.

“The Irishman” brilliantly bellows that Martin Scorsese, at seventy-seven, “has miles to go before he sleeps.”