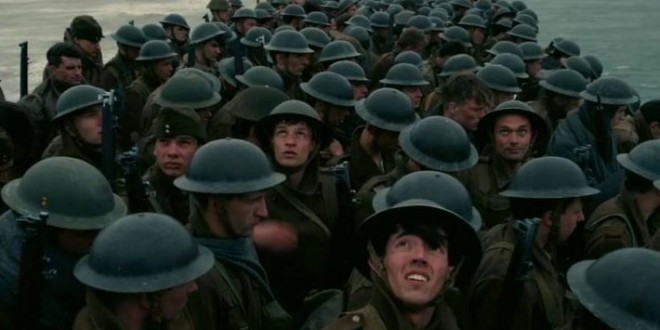 Christopher Nolan’s mesmerizing masterpiece on the vastness of vulnerability; war’s anonymous selection of who shall live and perish; regardless of rank, the process is random, emotionless, arbitrary. Nolan’s brilliant film focuses on a simple, far from extraordinary soldier, whose fate is in the hands of a higher power; “Tommy” (Finn Whitehead) runs through the streets of Dunkirk, searching for the beach of evacuation; his ubiquitous presence is the thread of cohesiveness that carries the wrenching scenario of the Battle and evacuation of Dunkirk between May 26-June 4th, 1940.

The pulsating action between aerial and water carnage; the relentless, tension-infused musical score by Hans Zimmer, massive annihilation intentionally transcend the acting; each role is a metaphor for courage, cowardliness, fate, randomness, tenacity; we know nothing about these men (many nameless); war as transformed them, their greater and lesser instincts are brought to the fore: Cillian Murphy, as a shell-shocked, pathetic survivor, his courage dissipated with his rescue; Mark Rylance as one of the many men who, defenseless, went to Dunkirk to save a multitude; Kenneth Branaugh as “Colonel Bolton”, symbolizing fortitude and hope despite overpowering odds; Tom Hardy, is a British pilot, whose marksmanship saves the day; singer/heartthrob Harry Styles proves that he more than just a pretty face, as a fierce and gutsy soldier, determined not to die.

There’s a profundity that permeates “Dunkirk”; Nolan’s genius immerses, incorporates the viewer in the experience; the core of its greatness lies in one word, spoken by a young man on a rescue boat, to a damaged soldier; “Yes”, saved and redeemed the last shred of dignity and possibly the future of this, forever impaired man.