Latest Reviews
Home » Hollywood » EVERYTHING EVERYWHERE ALL AT ONCE (in theatres) 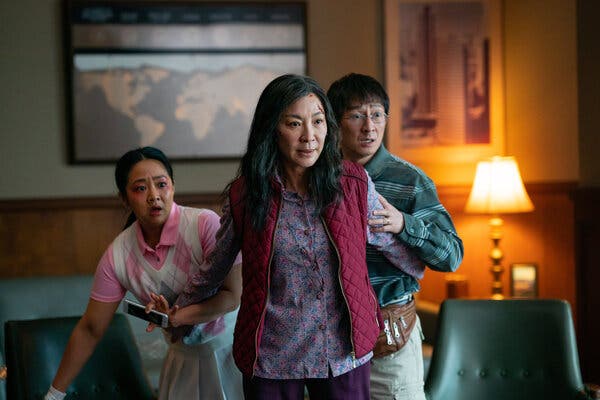 EVERYTHING EVERYWHERE ALL AT ONCE (in theatres)

A film with enough cacophonous hilarity, reminiscent of horror, science fiction (died & revived) frenzy and “Kill Bill” chorography, a myriad of universes; the Alphaverse, the connective tissue, observing the others; premature outcomes; if it escaped your understanding the first go-round, directors Daniel Kwan and Daniel Scheinert visually bludgeon viewers repeatedly with metaphors “never trust the obvious, the brighter the light, the darker the shadow, looks can be deceiving, love thy neighbor, if at first you don’t succeed…”); at its core (an “Everything”, big fat bagel) it’s about life’s decisions and how a family’s culture determines one’s choices and actualizing one’s myriad capabilities. It is a tilt-a-whirl, roller-coaster, once in a millennium experience. I loved it.

Initially confused about “Evelyn’s” mental fug and the multiple personas and universes she navigates; Michelle Yeoh’s remarkable, blazing performance anchors the film; she is transformative as the befuddled laundress, behind in her taxes, at odds with her contemptuous daughter “Joy” (joyless, rocketed depiction by Stephanie Hsu) questioning her marriage, (wonderfully sensitive, Ke Huy Quan) compensating for a doddering father; after Yeoh, Jamie Lee Curtis is stratospheric as a dreadful bureaucrat; both women represent prototypes of good and not-so-good; Marvel Mavens championing alternate universes.

There’s a cultish vibe quivering throughout the film; I wasn’t part of the clique but was thrilled to be included in the ride.

2022-03-31
Peneflix Admin
Share !
Previous: RUMINATIONS ON THE 94th ACADEMY AWARDS
Next: YOU WON’T BE ALONE (IN THEATRES)