Latest Reviews
Home » Hollywood » GET OUT 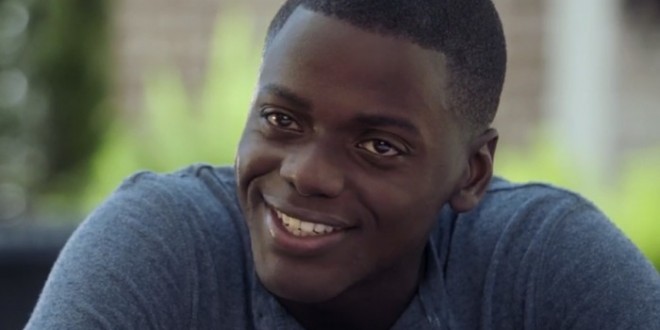 Writer/director Jordan Peele climbs into a black man’s psyche and capitalizes on his worst fears; “Chris Washington” (phenomenal portrayal by Daniel Kaluuya) is going to “meet the parents” of his ever-so-white girlfriend, “Rose Armitage” (Allison Williams well-matched with Kaluuya), at their even whiter bastion of bland, homogeneous suburbia; Rose repetitiously refers to her family’s lack of racial bias, claiming they would have voted for Obama a third time. Peele from the onslaught tweaks viewers; the Armitage milieu is fake, plastic, over the top obsequious, there’s a stilted, fifties feel in style and behavior;  Rose’s parents (sensationally slimy performances by Catherine Keener and Bradley Whitford); “Missy” is a psychiatrist; she hypnotizes “Chris”; the most brilliant, frightening scene in the film; “Dean” is a neurosurgeon, his repugnant proclivities are unveiled as the weird weekend spins to its unpredictable conclusion.

Peele addresses the “white man’s” stereotypical bromides, assumptions about black men: athletic prowess (Jesse Owens references) and Walter’s midnight runs; sexual aptitude, obnoxiously referenced at a garden party. Chris’s appeal, as he recognizes the untowardness of his hosts and their friends, is his resolve, confidence; even as the heinous activity escalates, Peele shatters Chris’s shackles, allowing him to “outsmart” this pristine, archetypical suburban family.

A trenchant social satire, infused with humor, spite and terror; more than a film “Get Out” is fabulous fodder for intellectual dissection; racial divisiveness, cohesiveness and compromise, integral to the discourse.

“Get Out” allows the viewer to tread gingerly in Peele’s fecund, dynamic, imaginative sphere.