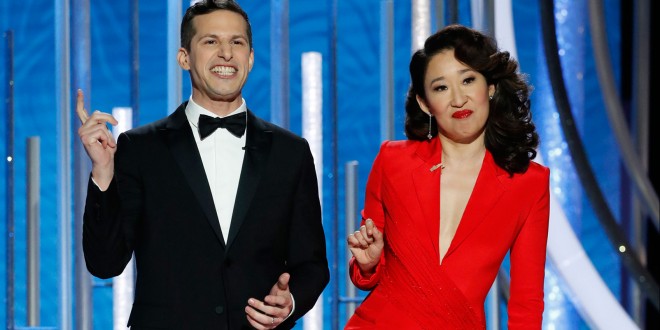 A night of glitz and glamour (Lady Gaga in an award winning gown), more importantly a night of civility and class; it was as if the egregiousness of this past year was left in the wake of a new era; the presenters and winners, like the strongest steel, emerged from the flames, surviving a year of discontent, stronger, highly polished and gloriously refined.

Hosts Andy Samberg and Sandra Oh (Best Actress in a TV, Drama, “Killing Eve”) struggled to ignite jejune material; bordered on being too politically correct; the flu shot sequence fizzled, but had limited air time. Fortunately, producers recognize that it’s the categories that reign, not the segways.

What resonated profoundly was the humility exhibited by the winners; all seemed to reflect on their journey to the platform, saluting those who gave them life, encouragement, inspiration: Sandra Ho’s parents were there to applaud her “Globe”; Regina King’s (Supporting role in a Motion Picture, “If Beale Street Could Talk”) eloquence in referencing past travails and future triumphs; Carol Burnett initiating the “Carol Burnett Award” with grace, style and poise, cemented her reputation as the TV queen of the comedic genre; Darren Criss (Actor in a TV series. “Assassination of Gianni Versace”) and Mahershala Ali (Best Actor a Supporting Role, “The Green Book”) beautifully articulated their performances of nonfictional characters,  the former a serial killer, the latter a legendary musician; Patricia Clarkson (Actress, Supporting Role, “Sharp Objects”), Olivia Colman (Best Actress, Motion Picture, Comedy, “The Favourite”) and Glenn Close (Best Actress, “The Wife”) cornered the market on abundancy of enthusiasm. Alfonso Cuarón , winning the Best Director and Best Foreign Film for “Roma” (once seen, never forgotten), soared in his inclusiveness, graciousness to the Foreign Press, Mexico and all who visited his homage to his family, upbringing and success.  Christian Bale (Best Actor, Vice”) was hilarious, brilliant, self-deprecating, checking with his wife for unforgotten “thanks”. Jeff  Bridges, soared as the Cecil B. DeMille Award recipient, humble, referencing his father, brother and sister, lauding his wife of forty-two years for his celebrity; also referenced “Bucky” Fuller as a beacon of inventiveness, who captained his course.

At the risk of being pejorative, there were two performances over the past year, that seared, altered my perception of greatness, an inevitability when your life revolves around film, (so many tonight, alluded to its universality and transformative powers); Rami Malek in “Bohemian Rhapsody” and Melissa McCarthy in “Can You Ever Forgive Me?” portrayed two characters with fervent, overpowering accuracy; genius oozed from their every pore, they were born, destined to be Queen and Lee Israel. Rami was acknowledged; Melissa, for the rest of her career will not only be defined as a comic, but in tandem, a peerless, hallowed thespian.