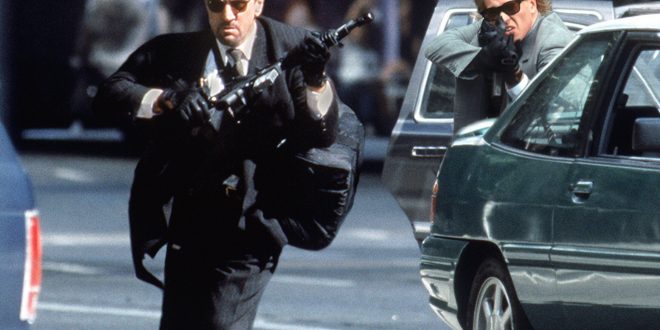 Last Sunday’s New York Times’s extensive article on writer/director Michael Mann, concentrating on his upcoming movie “Heat 2”, piqued my interest in a film I had never seen; a film of exceptional power, staggering achievement, mesmerizingly dazzling; “Heat” should be seen by anyone who wallows willingly in film’s “absolute beauty, visual joy and dreamlike sensibility”. “Heat” is a crime tale that tips the scales in authenticity, a masterpiece of intense veracity; a bank-robbing scene cloned to perfection, hailed by law enforcement for its bona fide accuracy.

Superb casting: actors at the pinnacle of their careers, glove-like replication of their characters: Robert De Niro, “Neil McCauley” a suited, sinister leader of bank robbers; Al Pacino, “Lt. Vincent Hanna”, McCauley’s nemesis, their iconic scene together, a study of men determined to follow their chosen paths, bracingly brilliant, in another realm they could have been friends; Val Kilmer, significantly stuns as “Chris Shiherlis” a deadly acolyte of McCauley’s. Mann imbues the feminine characters with strength and dignity, matching their male counterparts in mettle and might: Ashley Judd, hammers the role of “Charlene”, wife of Chris Shiherlis; Diana Verona, “Justine” pulverizing mate of Lt. Hanna; Amy Brenneman, naively divine as “Eady”, McCauley’s love interest. Mann focuses on their yin/yang, disintegrating relationships, a study of intentional equality.

Astonishingly “Heat” was ignored primacy in the 1996 Academy Awards; the “snub” historically ranks as one of the most outlandish affronts committed by the Academy; with age, it has exponentially grown in stature, taught in film schools as a classic of the crime genre. Christopher Nolan stated “you feel you’re watching a film about experts made by experts”; I concur unconditionally.