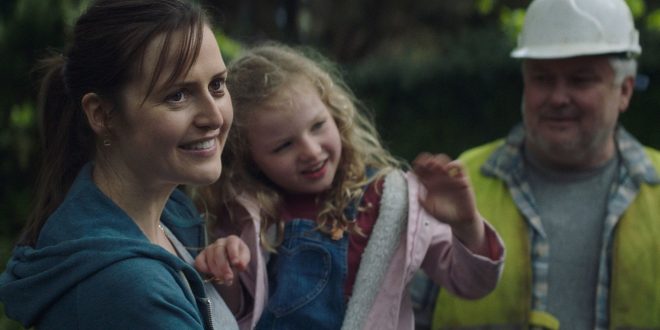 Two ambitious films excavating the lives of women, justifiably, “on the verge of a nervous breakdown”.

“HERSELF” directed by Phyllida Lloyd, starring writer and actor Clare Dunn, focuses on abused wife/mother “Sandra”; she is destitute, living on state benefits, residing in a hotel with her two young daughters (enchanting depictions by Molly McCann and Ruby Rose O’Hara), eking out a living as a domestic; her maniacal, soon-to-be ex-husband, “Gary” (Ian Lloyd Anderson) has visiting rights with his daughters, the youngest refuses to accompany her elder sibling; ugliness, meanness oozes from his every pore.

Sandra (Herself), aided by the largess of her employer “Peggy” (formidable Dame Harriet Walter), builds a house for her family; kindness, integrity throbs with every characterization; individuals of fortitude, mettle and grace contribute to Sandra’s aspiration. Anchored in realism, shunning a fairy tale deduction, “Herself” lionizes the “power of one” to emancipate, with incomparable depth, the triumph of one’s will.

“PIECES OF A WOMAN”

Vanessa Kirby (“The Crown”) skyrockets as a woman emotionally pulverized by the death of her newborn daughter: “Martha Weiss” and her partner “Sean” (inordinately disguised Shia LaBeouf) have elected to have a midwife deliver their baby at home; painfully portrayed in real time, viewers, whether experienced or not, receive the full Monty birthing operation; the aftermath maneuvers through platitudinous, metaphorical muck: Martha, incapable of verbalizing her cataclysmic grief, looses interest in Sean (unimaginable their initial attraction); Sean, loutishly, spirals down his own gloomy portal; Martha’s mother “Elizabeth” (inimitable Ellen Burstyn) a surrogate for the Greek chorus portents the ultimate outcome.

Hungarian director Kornel Mundruczo acknowledges that when shattered the pieces, forever divorced, each forming their own entity, are altered,  but still viable.