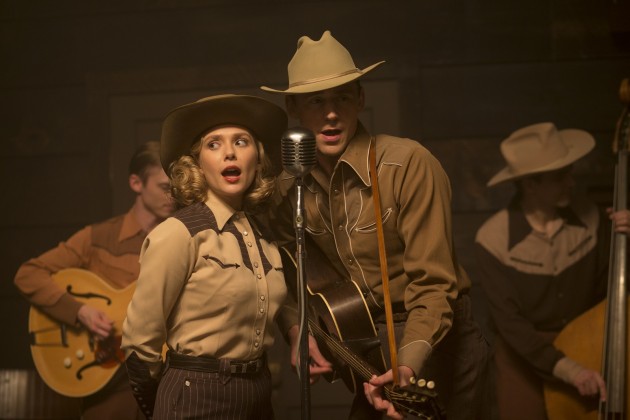 I SAW THE LIGHT

Hank Williams (1923-53), country western singer and songwriter, supernova, whose fire was extinguished at the age of twenty-nine; a damaged heart and back (spina bifida), a voracious alcohol and drug addiction cauterized his longevity. He is immaculately depicted by English actor Tom Hiddleston.

Hiddleston, an accomplished Shakespearian actor (check out the BBC broadcast of “The Hollow Crown: Henry V”) bears an eerie resemblance to Williams: long, lean limbs and face, graceful stride, and a voice reminiscent of William’s gift.  “I Saw the Light” focuses on Williams’ catastrophic love life, especially with his first wife, “Audrey” (appropriate, disquieting performance by Elizabeth Olsen); his dominating, shrewish mother, “Lillie” (saucy, commanding, Cherry Jones) feeds the divisiveness between Hank and his ladies. The redundancy of the traumatic tensions impedes the film’s success; midway through, its energy fizzles and as marvelous as Hiddleston is, the “light” dims and “cold hearts” are robbed of warmth.

Writer/director Marc Abraham’s  life-long adulation of Hank Williams, captures the crux of the man; in an interview Williams is asked about the idolatry of the populace for his songs; he poetically describes his ability to put into words and music the pain, darkness that all possess but are incapable of describing. His lyrics, profoundly capture the human condition, the reason, legendary Hank Williams, continues to thrive.