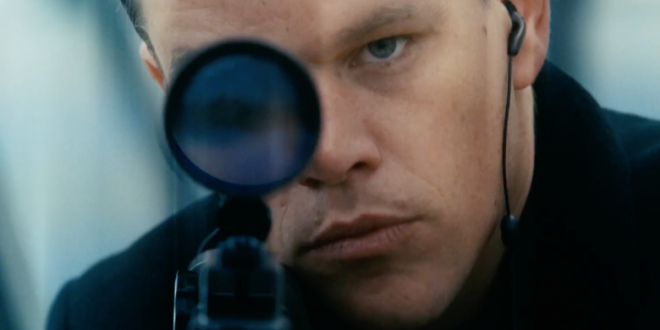 Does anyone care if the script is only five pages in its entirety? Or the cost of carnage, runs into the tens of millions? Unequivocally, no.

He’s back….Robert Ludlum’s (1927-2001) over-the-top, charismatic, iconic  “megasaver”…..”Jason Bourne”. Matt Damon imbues him with the proper attributes we crave in our action heroes: sensitivity, Herculean strength and the inscrutable intelligence required to validate his survival: he’s shot, bludgeoned,  navigates all vehicles with the skill and dexterity of a present day Parnelli Jones; he springs up after falling five stories, where the other guy is in Humpty Dumpty mode. Oh, how comforting to know that no matter the vicissitudes, death- defying feats, our man walks away, lives to fight another day, unscathed.

Jason, through a series of flashbacks, is desperately trying to get to the roots of his father’s assassination. His roadblocks are personified by “CIA Director Robert Dewey” (Tommy Lee Jones gifts the character intuitive cunning, duplicity and believability); the “Asset” highly skilled, amoral assassin, played sensationally by Vincent Cassel (“Mesirne”); his sculpted, beautifully carved face is made for the villainous characters he masters.

Adding to the subterfuge is “Heather Lee” ,despite her acting acuity, lack of makeup and dour punim, Alicia Vikander is too young for the role of a hacker and counterinsurgency expert, working with the CIA. Newcomer Riz Ahmed (“The Reluctant Fundamentalist”, “The Night Of”) fits naturally into the guise of computer billionaire, “Aaron Kalloor”.

Director Paul Greengrass in tandem with composers David Buckley and John Powell (“Extreme Ways” sung by Moby) succinctly marry the soundtrack and scenario, contributing to the heightened tension, without distracting the viewer, resulting in the consummate partnership.