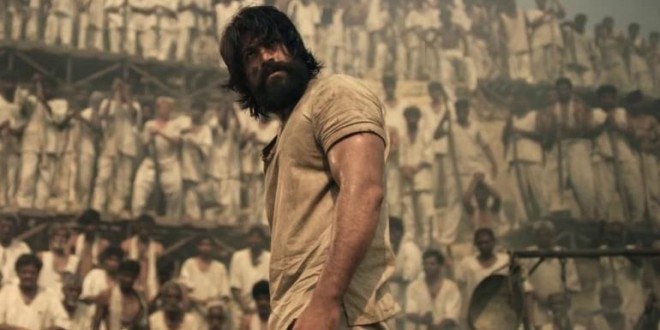 Choosing between two Bollywood blockbusters: “Zero”, Shah Rukh Khan playing a mini-version of himself or “K.G.F: Chapter 1”, my vote for the latter resulted in over 2 1/2 hours of bombastic, cacophonous, tumultuous entertainment. Writer/director Prashanth Neel’s tale of oppression commences in the early 1980’s; cutting to the chase with a limited script, “Rocky” champions the oppressed, inciting their rebellion and escape from the Kolar Gold Fields in Karnataka, India.  Cinematography by Bhuvan Gowda is a breathtaking, realistic testimonial of slavery in modern times. Actor, Yash’s muscular performance as the lionhearted Rocky, is compromised only in the “wooing” scenes (Shinidhi Shetty is love interest, “Reena”) by sophomoric, inebriated blubbering; he fares much better in his solitary slaying of multitudes, championing the tyrannized and obliterating untoward politicians and egregious landowners. (Challenging to differentiate between the “whiskered” cast.)

More than the actors, plot and gorgeous cinematography, it is the sound track that magnificently plummets viewers and enhances every scene; Ravi Basrur’s masterful, exhilarating score captures one’s imagination for the film’s entirety.

“KGF: Chapter 1”, lacks the depth and scope of the “The Ten Commandments” and “Rocky” is no “Moses” but is compelling enough to warrant the second chapter.

2018-12-24
Peneflix Admin
Share !
Previous: WELCOME TO MARWEN
Next: IF BEALE STREET COULD TALK