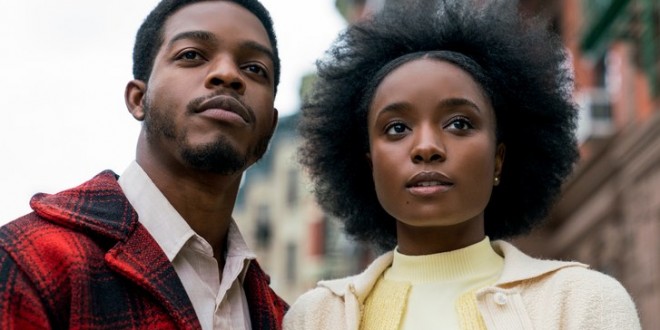 IF BEALE STREET COULD TALK

There is a reverence that saturates every blissful moment of this remarkably fine film, based on James Baldwin’s 1974 novel; Beale Street; a metaphor, microcosm for an African American’s unique experience: New Orleans, Chicago, New York, lives mimic each other. Writer/director Barry Jenkins, (“Moonlight”) true to Baldwin’s poetic tale but infused with a heart defined by the twenty-first century; here is a feat, so immensely human, it defies race, demographics, ethnicity. A sincere love story of two young people, bonded from infancy, and now at twenty-two and nineteen, recognize the immutability of their destiny: “Tish Rivers” and “Alonzo,”Fonny” Hunt” masterfully, magnificently illustrated by Kiki Layne and Stephen James; wonderment expands with the purest joy, as their love, intensifies. Pools of trust are Tish’s eyes, eyes that in the words of F. Scott Fitzgerald one walks into,  closing the lids behind; Fonny is a sculptor, ambitiously looking for a loft, he has plans, nothing to stunt his goals until fate intervenes and he is devoured by the penal system.

Herein lies the intelligence, edification of “If Beale Street Could Talk”; pervasive in a black man’s world is “mistaken identity”. Daily, we read of inmates being released after years of serving another man’s penance; fostering conformity, penitentiaries suck individuality, creativity and hope from their detainees; heartbreaking sacrifices are required from their financially ambushed families; Regina King, Tish’s mother, “Sharon River”, in a harrowing scene pleas with the victim, the innocence of Fonny; resulting in raw, unadulterated, disillusionment.

The ultimate triumph is a relationship, despite its tribulations, lacks revenge, bitterness, ugly angst, rises above the fray and screams at the highest pitch, the voluminous depth of their love.

Beale Street does speak, loud and clear, all one has to do is listen.