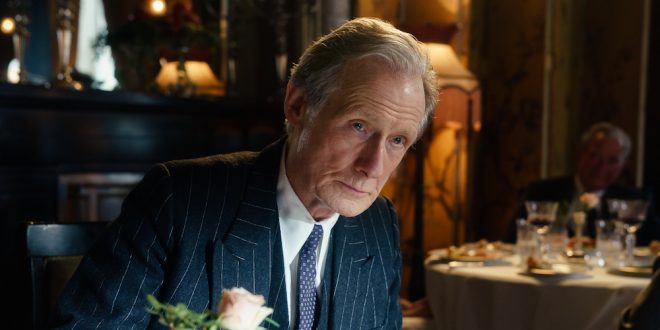 Bill Nighy is overwhelming, stratospheric, instinctively perceptive in his role as “Mr. Williams”, based on the film “Ikiru” by Japanese filmmaker Akira Kurosawa (“Seven Samurai”); here is a brilliant remake of a 1952 classic. No longer Japan, but London, where a robotic bureaucrat, Mr. Williams, learns of his imminent death and shockingly realizes he has never lived; impeccably imbued with catastrophic thinness, a countenance of dignification so off-putting, co-workers avoid invading his space; the daily minutia, mundanity of inconsequence that has defined his life is shattered by the exuberance of “Miss Margaret Harris” (divine diva, Aimee Lou Wood), a personification of untold joy, fearlessness of decision making; she is a metaphor for missed opportunities, a “Charon”, motivating his flight from the averageness of his dumb duties to actually making a difference, a legacy of embracement: something to do, live and hope for.

“Living” directed by Oliver Hermanus, inspires one to gobble every waking and dreaming minute of one’s existence; actively maintaining an organic, throbbing curiosity, emotional awareness, lusting for the innovative, creativity of the contemporary, tackling the unattainable, that which seems beyond one’s capabilities, because in the end “we only regret the chances we didn’t take”.