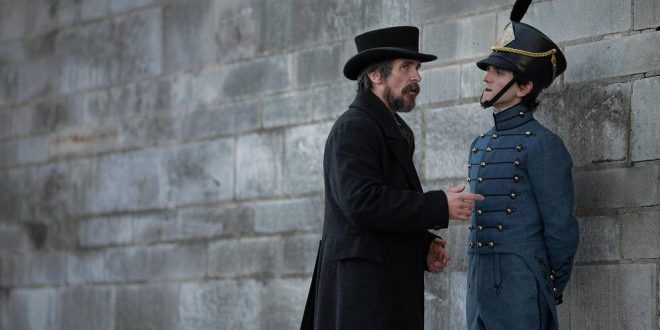 Edgar Allan Poe (1809-1849) and his supernaturally bleak imagination translated into thrilling, titillating prose and poetry, has long held an undeniable fascination, compellingly haunting appeal: “Lenore”, “Annabelle Lee” their absence festers at the heart of Poe’s sensibilities, he mourningly acclaims the expiration of beauty; “the pale blue eye” of the purest ingenue, denied maturity. “The death of a beautiful woman is, unquestionably the most poetical topic in the world.”

“The Pale Blue Eye” directed by Scott Cooper based upon the novel by Louis Bayard cleverly places Edgar Allen Poe (overwhelming characterization by Harry Melling) at the heart of a murder investigation at a Military Academy (Poe had a minimal stint as a cadet at West Point, 1830) aiding Detective “Augustus Landor” (morosely formidable Christian Bale) in solving the murders and missing hearts of two cadets. The progression, as layers of mysticism, religiosity, occult are illuminated, patience is key to rendering a satisfactory, at times manipulative conclusion, the final scene between Poe and Landor is pungently, poignantly powerful; Poe’s tragic vulnerability, streams from a soul tortured by unrequited aspirations, conceding that “All that we see or seem is but a dream within a dream.”