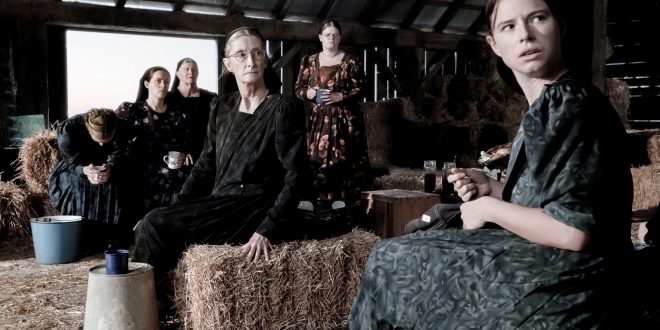 The power of intelligence resonating at the core of this prodigious film is astonishing; at certain points, wishing to “pause”, “rewind”, and “replay”, cementing a vocabulary of deducted reasoning, purely processed, through the words of women, sorely abused, illiterate, questioning the dictates of a religion that demands “forgiveness” for egregious behavior, perpetrated by a male population, justified in their debauched, animalistic behavior, caught and held accountable, their victims, have twenty-four hours to decide, restricted by three choices: forgive and do nothing, stay and fight or leave the community that has defined, determined their blighted existence from birth.

Intensely metaphorical, director Sarah Polley references her personal experience of unrequited justice and those women worldwide, unrevenged, depersonalized, covered in guises, eliminating individuality; women in uniforms, identifying their status, role in a miserly, unimaginative society. Stratospheric performances by: Claire Foy’s, “Salome” encapsulates the anger, frustration, rage of impotency, unreciprocated accountability; Jessie Buckley’s “Mariche’s” epochal bitterness, vituperative hatred of the perpetrators spurs the group’s decision; Rooney Mara’s “Ona”, unlike the others, has not been completely subjugated, squashed emotionally, allows room for light and love; Ben Whishaw, as “August” is the Scribe, witness, enamored of Ona, the only male of consequence bequeathed with the enormity of historical liability.