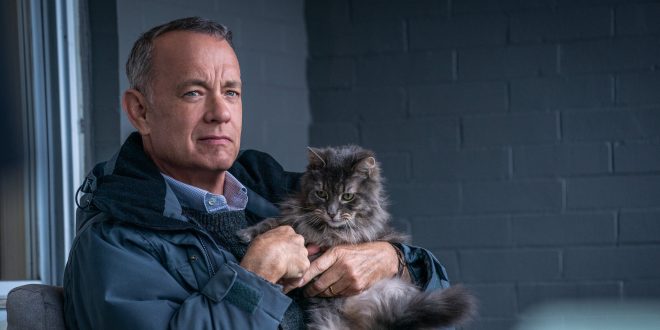 Fredrik Backman’s 2012 novel “A Man Called Ove” translates prodigiously in director Marc Forster’s version of a charismatic curmudgeon, circumstantially forced to keep living after the death of his wife; Tom Hanks (in tandem with his son Truman Hanks, as an aged and youthful “Otto”) dazzles as a man at the precipice of despair, aching only to be united with his life’s force, the only reason to wake with the dawn “Sonya” (sapient Rachel Keller) who grasps the integrity of his soul; with an ardent distrust of mankind, in bulk classified as “idiots”, he camouflages his kind heart with a bitter, gruff façade; in reality he fools no one and his falsified demeanor is blasted to smithereens by “Marisol” (trailblazing performance by Mariana Trevino) and her family; Hanks’s phenomenal intuitive acuity prevents the stereotypical; Otto’s depth, goodness, kindness seeps into being as he and Marisol navigate the corridors of pain and gargantuan trials he has forged to reach his dire state; never has loss or grief been so clearly identifiable, viewers sob with its familiarity.

Having once read that when you die you take with you the things you gave away while alive; Otto’s passing will be followed by fleets of cargo, claiming the loss of a man fulfilling his destiny, an ordinary man, a man who made an extraordinary difference.

2023-01-18
Peneflix Admin
Share !
Previous: LIVING (in theatres)
Next: TURN EVERY PAGE – The Adventures of Robert Caro and Robert Gottlieb (in theatres)