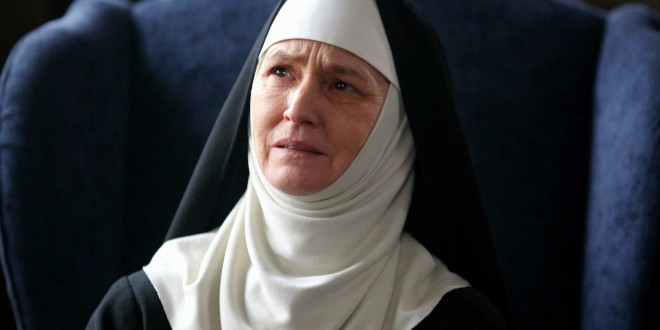 A searing commentary on the milieu of the Catholic Church and its intransigent, grueling dictates, regarding young women (novitiates) in their quest to bind forever, becoming “Brides of Christ”, with a Supreme Being, worthy of a lifetime of silence, sacrifice and prayer. The year is 1964 in the midst of the Vatican II Council (1962-1965); roiling, controversial times which changed the face of the Church, irrevocably.

“Cathleen” (glorious, Margaret Qualley) shuns her mother “Nora’s” (riveting, Julianne Nicholson) lifestyle, and at seventeen enters the convent as a “novitiate”. Her glowing, beautiful purity and faith, never in question; her “calling” ingrained, cemented in her every fiber. The initiation or “elimination by intimidation” commences; endurance and dedication must be tested, sustained for a two year period, before taking the final “bridal” vows.

Director/writer Maggie Betts marvelously captures the troubling insecurities, haunting, forbidden sexuality, of these fledgling novices; enforced silences, humiliating group confessions, arcane punishment of self-flagellation, all consecrated on the erasure of individuality; a solitary focus, their love for Christ. Melissa Leo, the “Reverend Mother” is blisteringly brutal as the “enforcer”;  forty years she has served her God, and tells the novices that when she speaks it is His voice and commands they hear; unnerving, unsettling claustrophobia, paranoia informs their cloistered world.

“Novitiate” viewed with fifty-year hindsight, is a powerful indictment of a religious institution’s dominance over its supplicants; but because of Pope John XXIII and the second Vatican Council women may choose to live a life of piety, pledged to a divine personage, without shunning, fearing or excommunicating the rest of mankind.