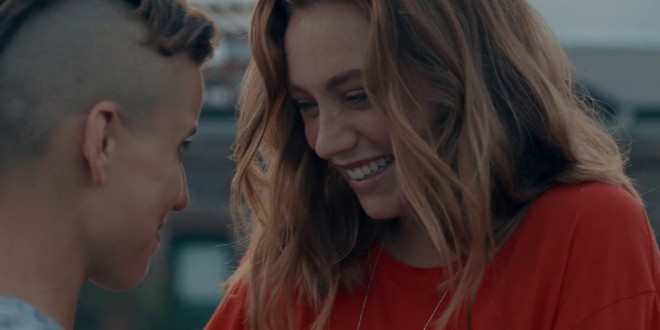 There is overwhelming beauty in Stephen Cone’s wonderfully crafted “Princess Cyd”; a successful, middle-aged author, “Miranda” (a character inspired by writer Marilynne Robinson); Rebecca Spence’s glowing, breathtaking performance, infused with wisdom and finesse anchors the film. She invites her sixteen-year-old niece, “Cyd” (Jessie Pinnick is equal to the pairing) to spend a portion of the summer in her Chicago home; Cyd’s mother has been dead for eight years, the gruesome details unveiled later in the scenario; Cone (“Henry Gamble’s Birthday Party”) is a master at allowing the story to evolve rhythmically, honestly.

The women gingerly tiptoe around their disparate feelings: spirituality grounds Miranda and illuminates her prose, whereas Cyd, in the embryonic stage of sexual awakening, challenges her aunt’s singular, solitary lifestyle. Their conversations reverberate with intelligence and respect. Their relationship gathers depth and integrity with acceptance and understanding, narrowing the generational gap, Miranda dons a bathing suit for the first time in eons (it still fits!) Cyd enters Mirada’s cerebral milieu by reading some of her works. With a few hiccups, it is fascinating watching the narrowing of the chasm between them.

The narrative incorporates a delightful, sprite of a girl, “Katie” , comfortable in her alternative lifestyle; Malic White adds whimsy, enchantment and stunning insight into the plight of a lesbian taunted and tormented because of who she is.

“Princess Cyd” is a graceful, radiant homage to lovers of the written word, be it poetry, fiction or non, it gifts wonderment, knowledge, starves off loneliness, and delivers a banquet of satisfaction far greater than any ephemeral, epicurean feast.

2017-11-03
Peneflix Admin
Share !
Previous: THE KILLING OF A SACRED DEER
Next: NOVITIATE